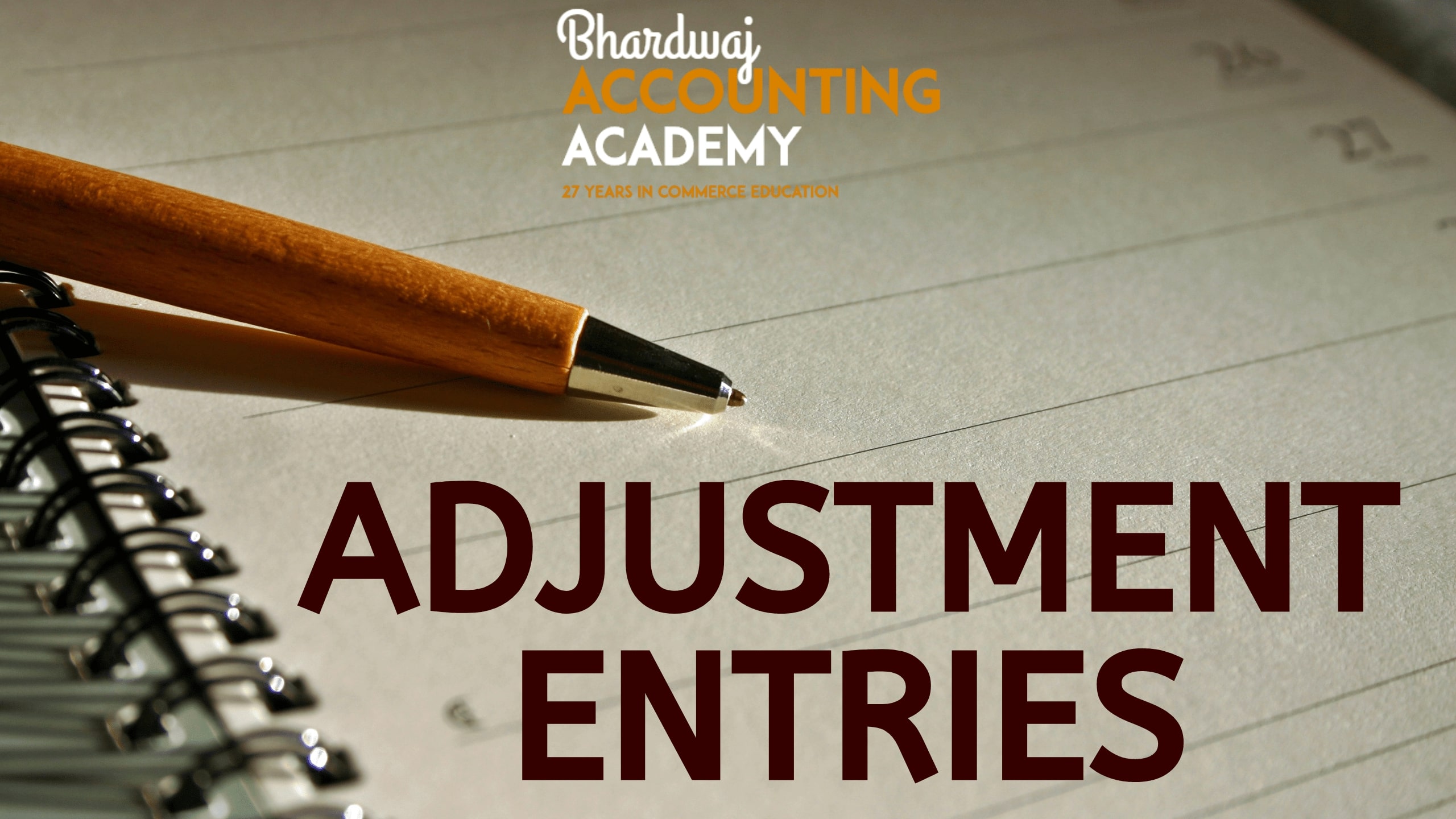 Adjustment entries- Adjustment entries are those entries that need to be passed at the end of the accounting period so, that the true profit or loss and fair financial position of the business can be shown.

Meaning of adjustment-All those items relating to income or expenses which require to be adjusted at the time of preparing final accounts is called Adjustments.

Objectives or need of adjustments-

(i) To show the true net profit/ net Loss of the business concern.

(ii) To show the assets and liabilities at their actual values.

(iii) To make a record of the transactions omitted from the books of accounts.

(iv) To record all outstanding expenses.

(v) To record all accrued incomes.

(vi) To create reserves and provisions.

(vii) To overcome the limitations of Trial Balance.

(viii) To show the true and fair financial position of the business concern.

(x) To provide for depreciation.

The stock of goods remaining unsold at the end of the accounting period is called Closing stock.

Closing stock is refers to as the amount of unsold goods that remain with the business on a given date.

Ordinarily this does not appear in the Trial Balance.

Hence, this needs to be incorporated in financial statements.

Note- Closing stock is to be Valued at cost price or market price whichever is lower.

The adjustment entry for the closing stock will be:

Closing stock appears on the credit side of the Trading Account.

Closing stock appears on the Assets side of the Balance Sheet.

In case closing stock has already been accounted for it will form part of the Trial Balance and hence there is no need of making any adjustments in the Trading A/c.

Then the adjusted closing stock will be appears on the asset side of the Balance Sheet only. 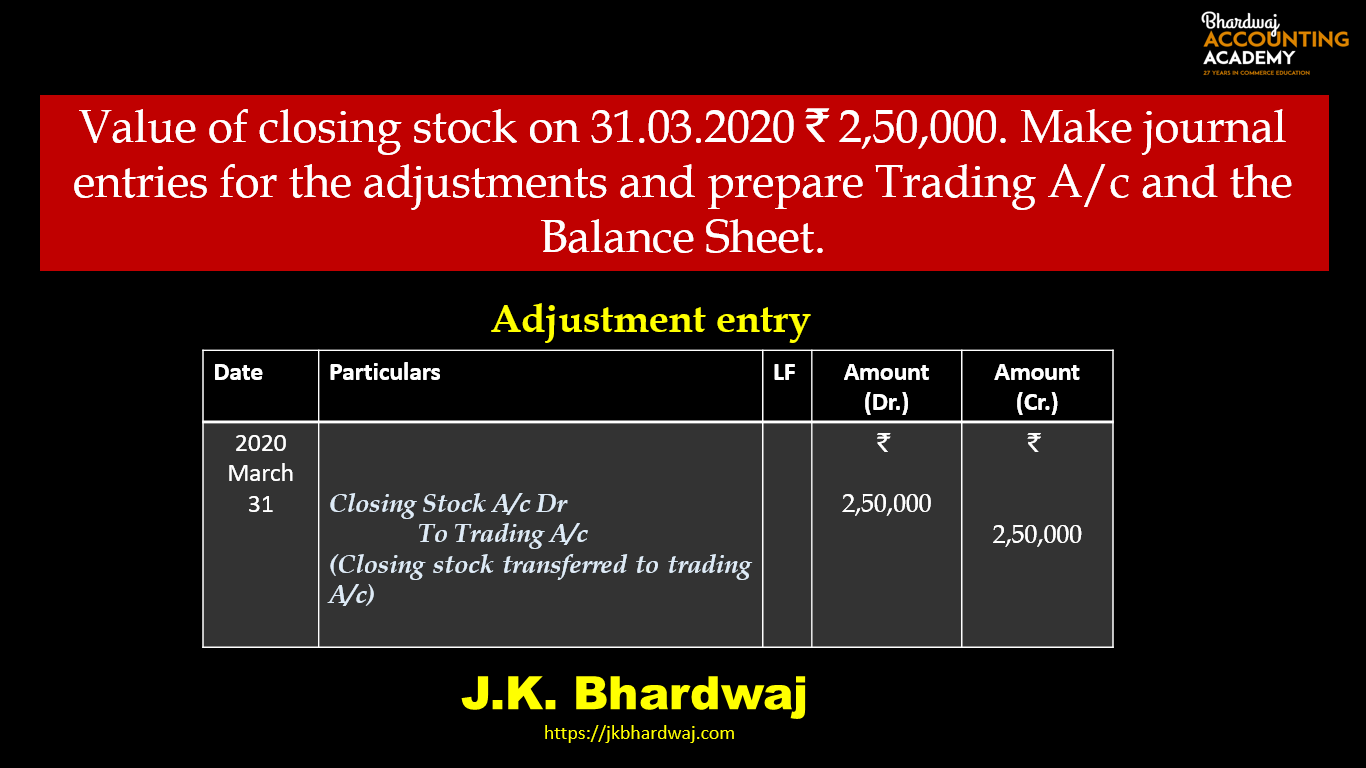 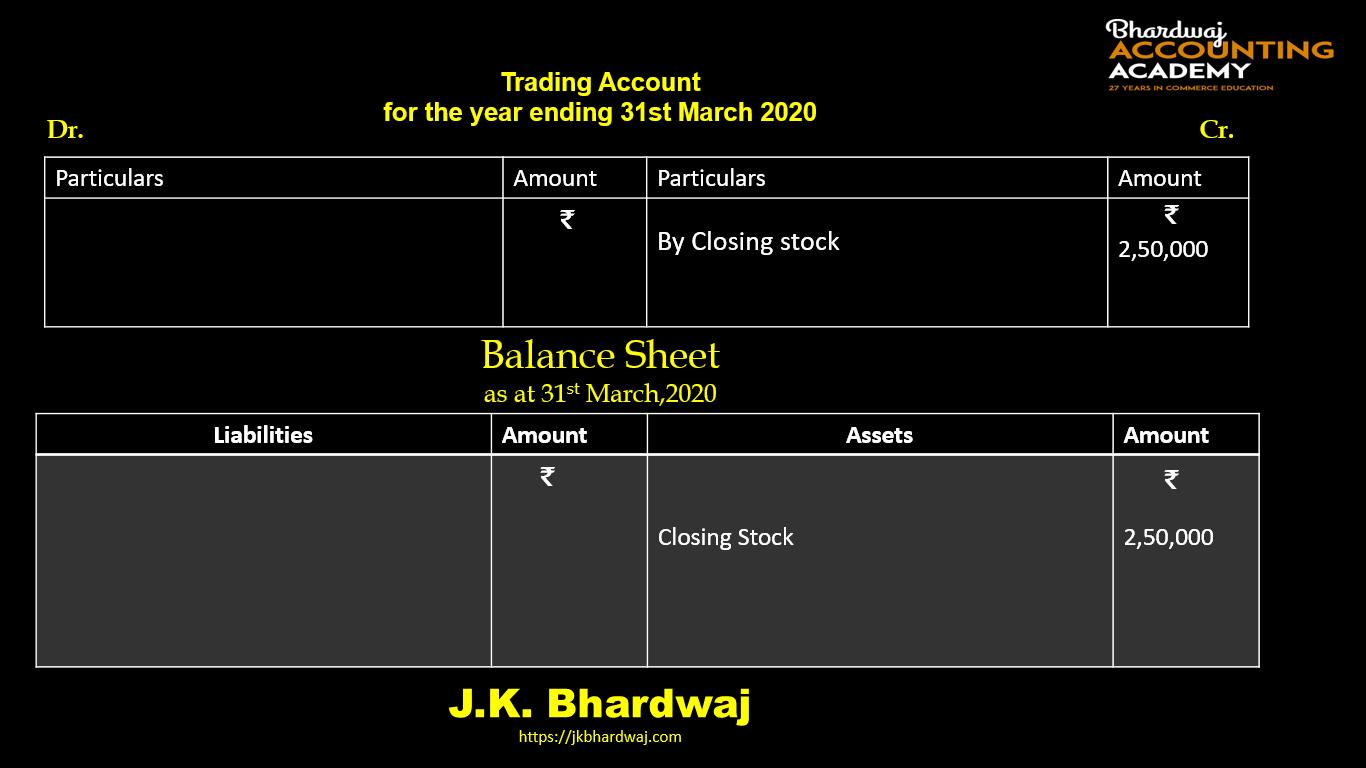 Expense which is related to the current accounting period but not yet paid is known as Outstanding Expense.

Suppose the accounts are closed on 31st March every year.

Salary for the month of March is due but not paid. It is an example of salary outstanding.

In case of Salaries Outstanding following adjustment entry will be made :

(Salary outstanding for the month of March)

Outstanding Expenses given outside the trial balance-

Add to the concerned item on the Debit side of Trading/Profit & Loss Account.

Shown on the liabilities side of Balance Sheet.

If Outstanding Expenses given in trial balance-

Shown on the liabilities side of Balance Sheet. 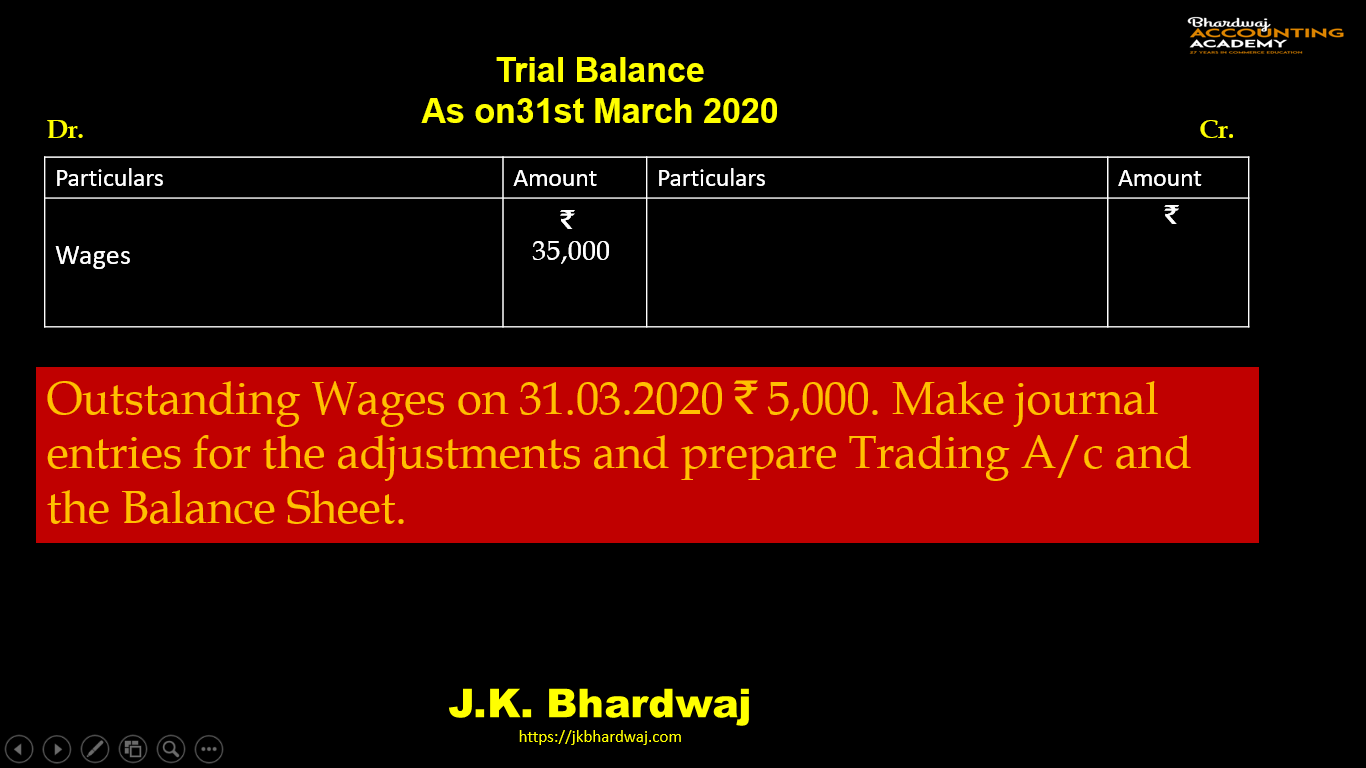 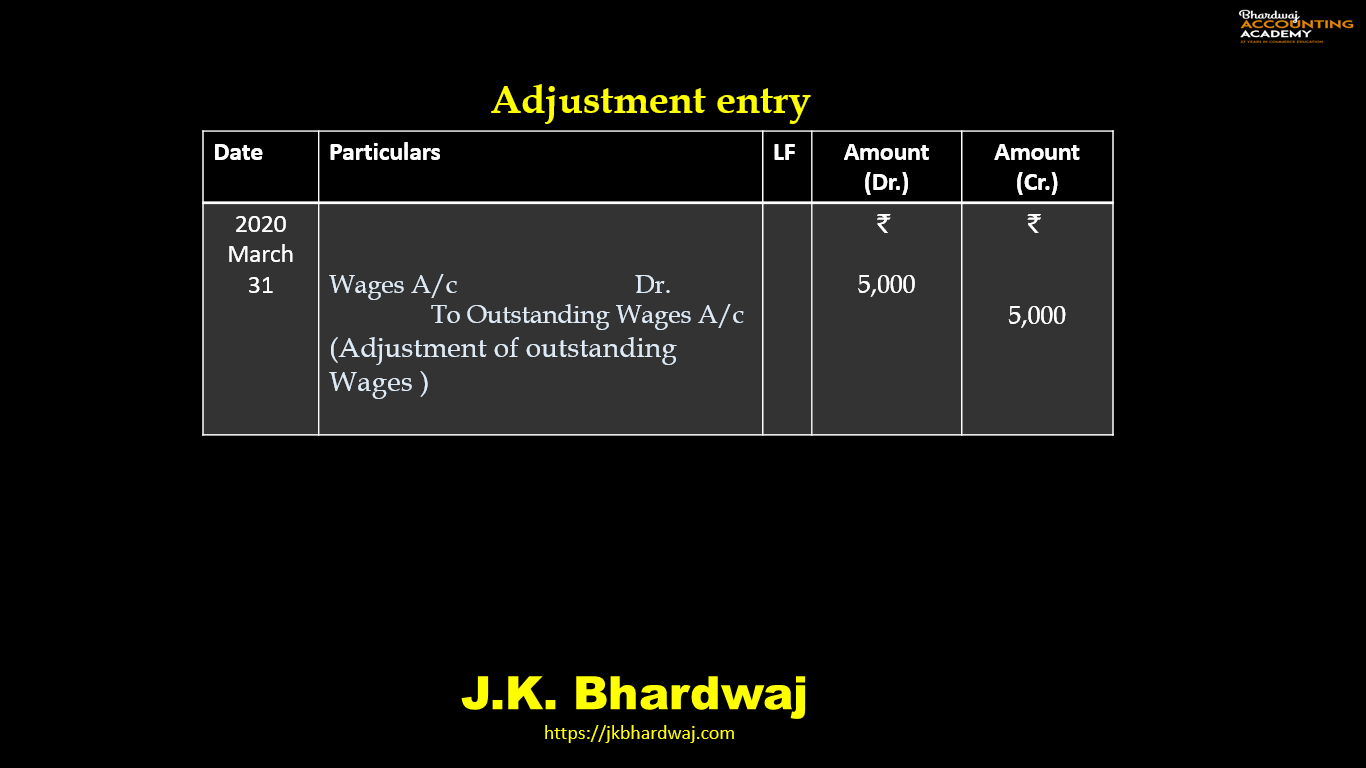 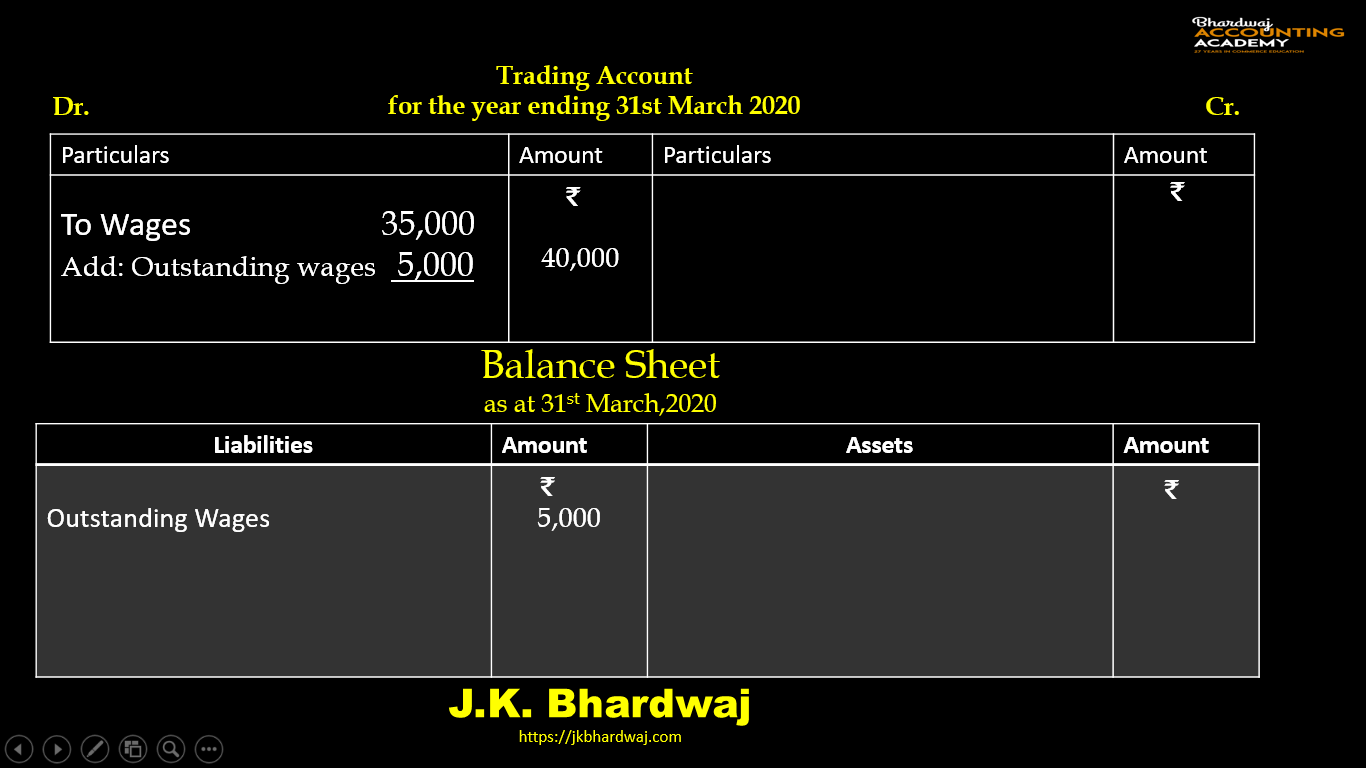 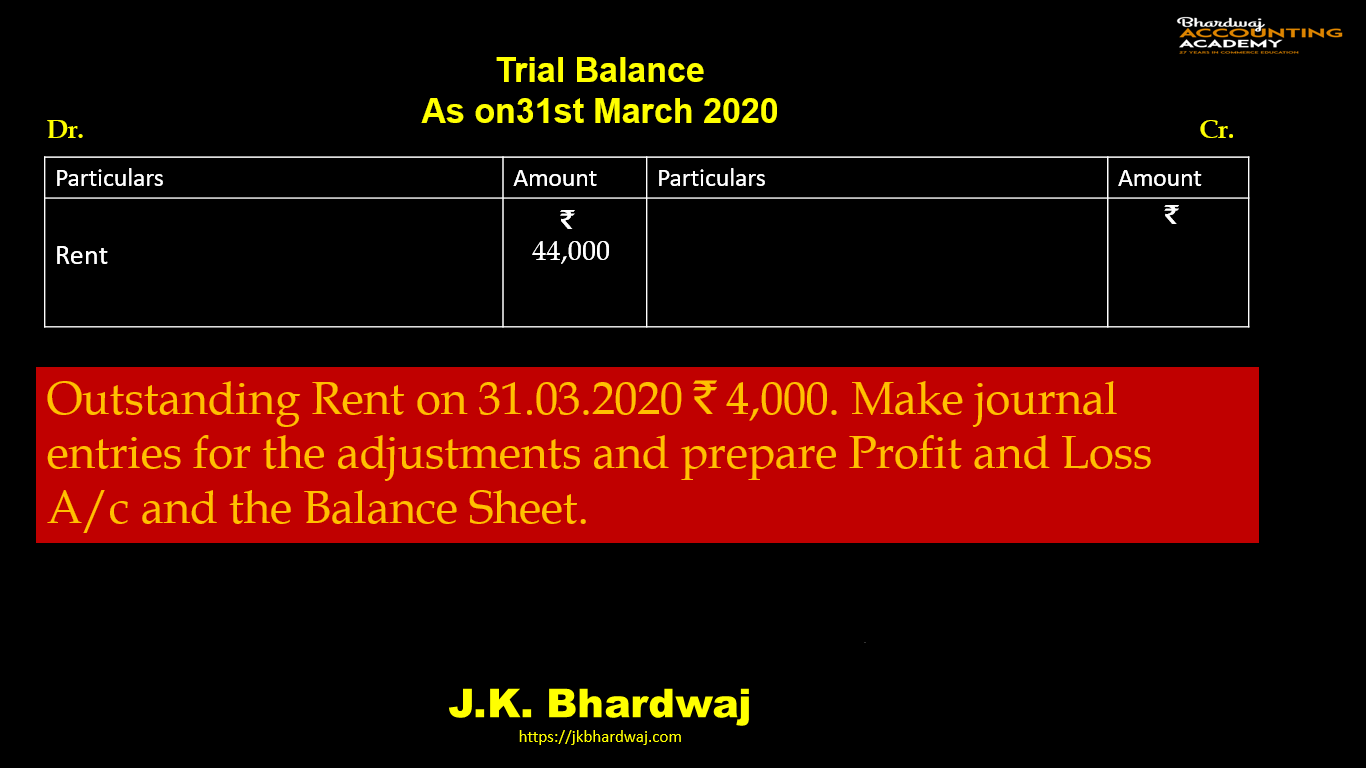 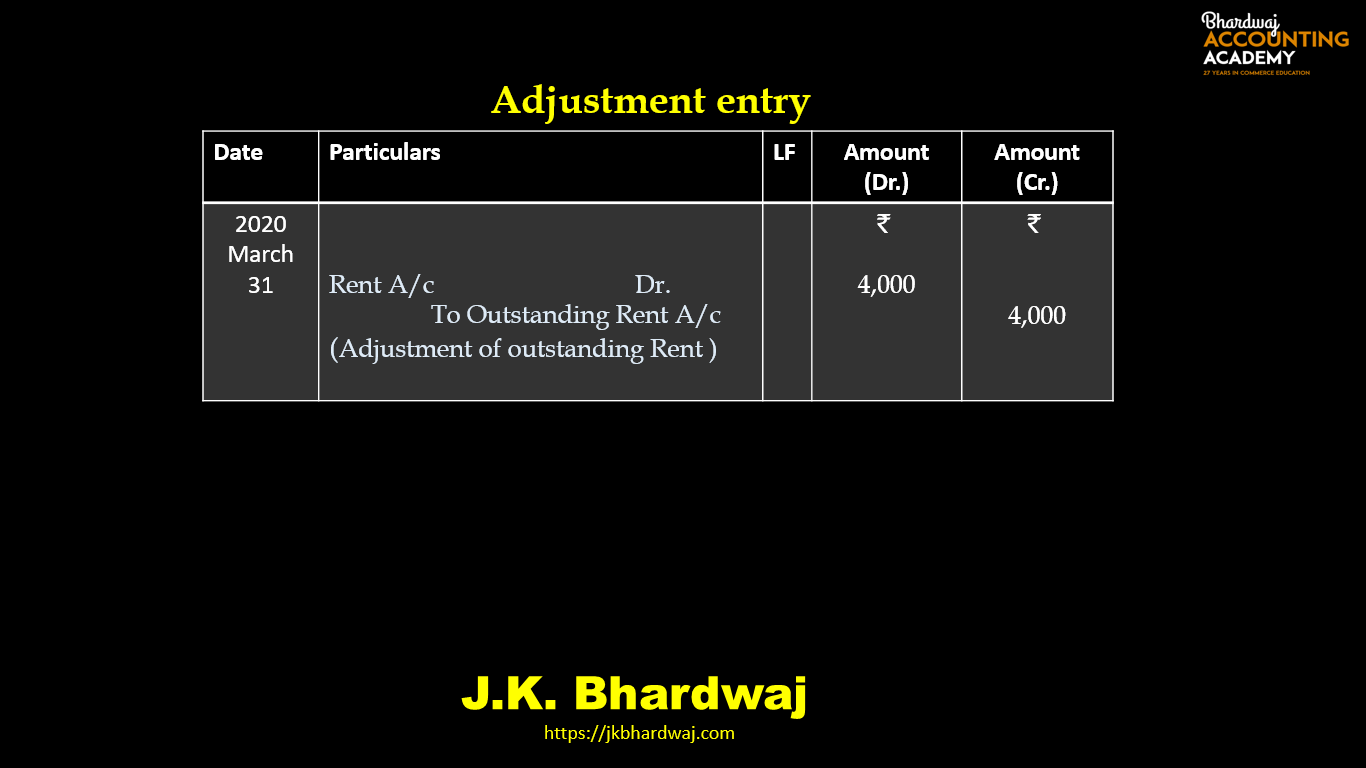 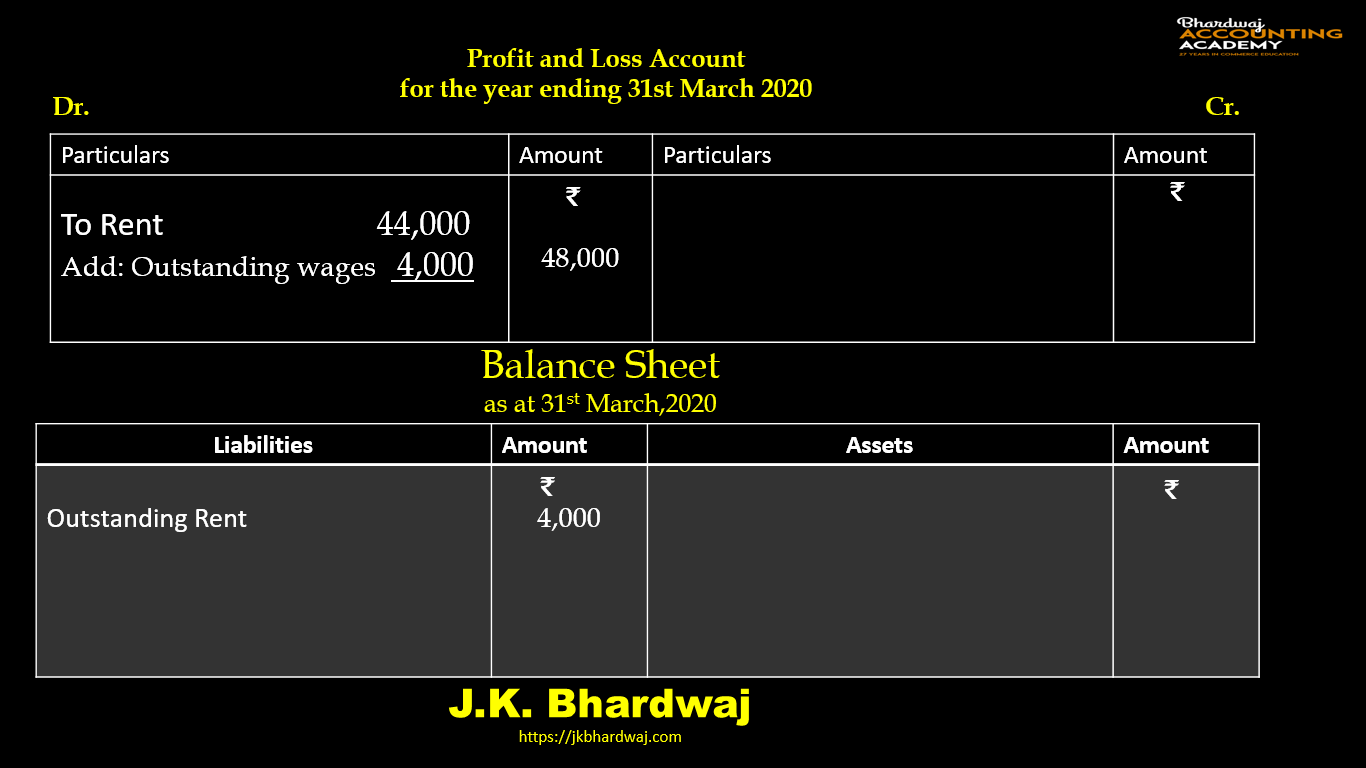 Sometimes a part of a certain expense paid may relate to the next accounting period. Such expenses is called prepaid expense or expenses paid in advance.

At the end of the accounting year, it is found that the benefits of some expenses have not yet been fully received; a portion of its benefit would be received in the next accounting year. This portion of expenses is carried forward to the next year and is termed as prepaid expenses.

Show on the assets side of Balance Sheet

If Prepaid Expenses given in trial balance-

Shown on the Assets side of the Balance Sheet. 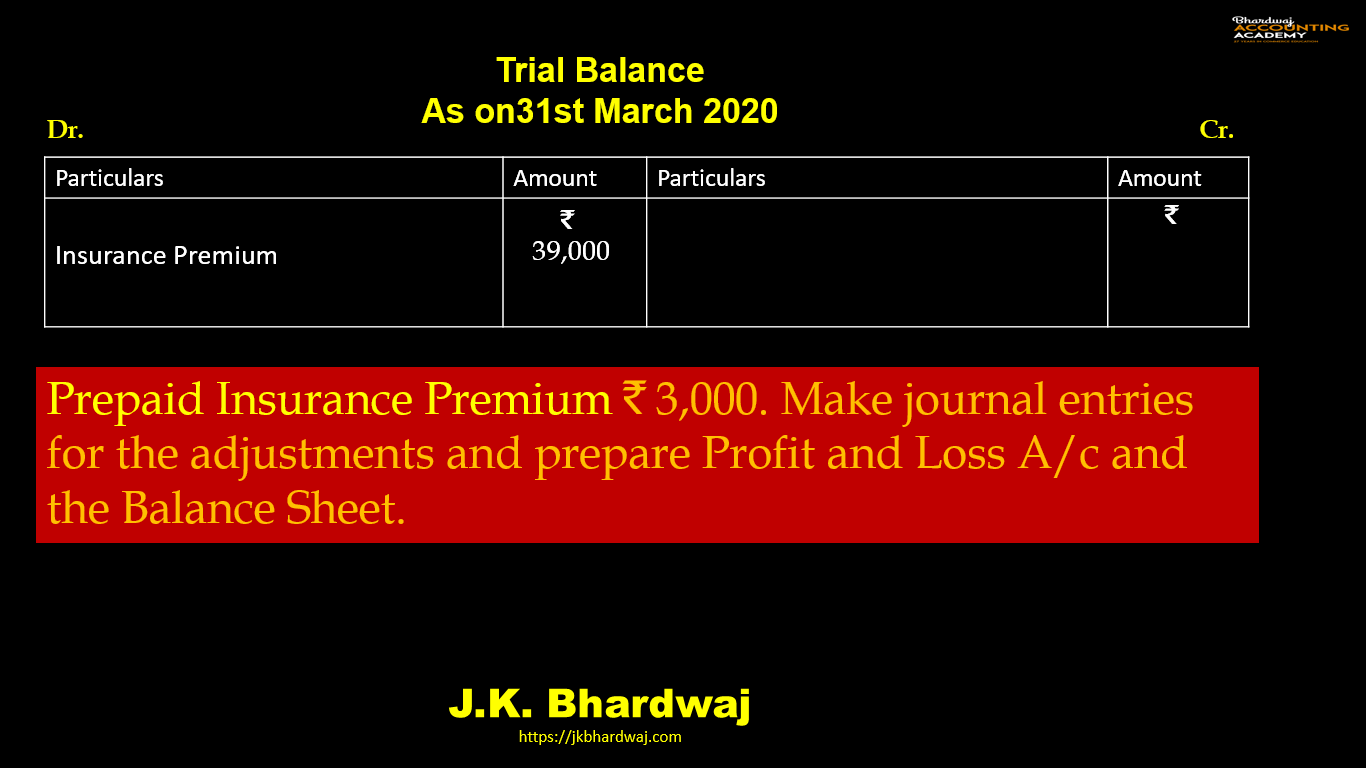 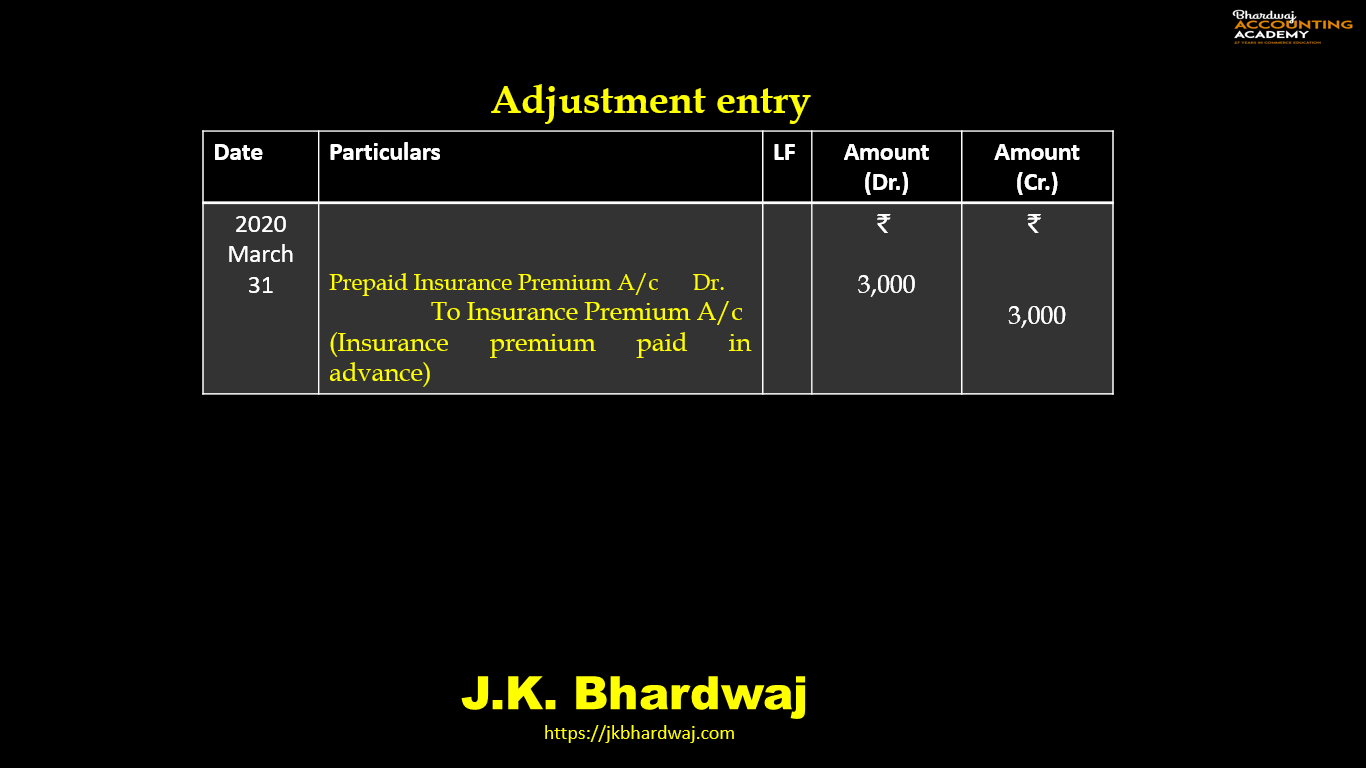 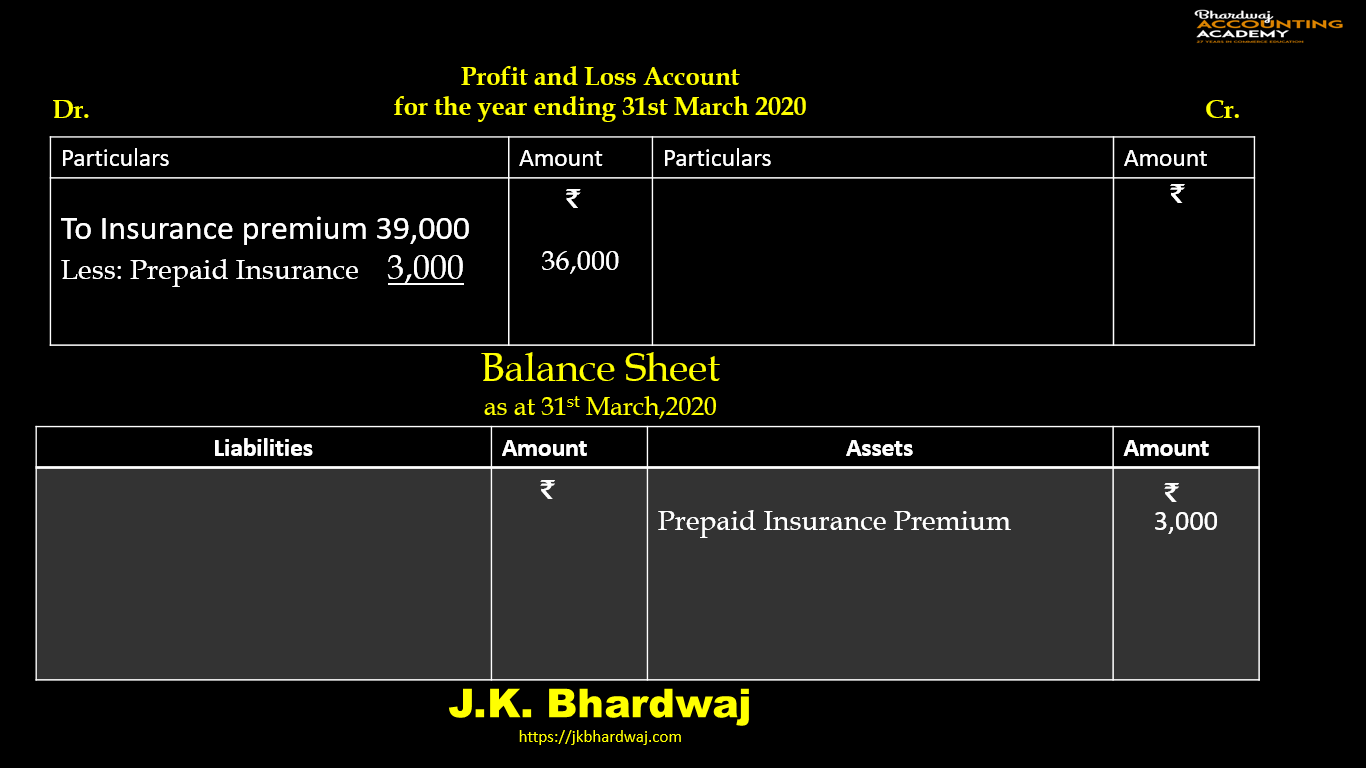 (Due but not received)

It may sometime happen that certain items of income such as a interest on fixed deposit, Dividend on shares, etc. are earned during the current accounting year but have not been actually received by the end of the same year. Such incomes are known as accrued income.

To Interest on Investment A/c

(Adjustment of Accrued Interest on Investment )

Show on the assets side of Balance Sheet.

Shown on the Assets side of the Balance Sheet. 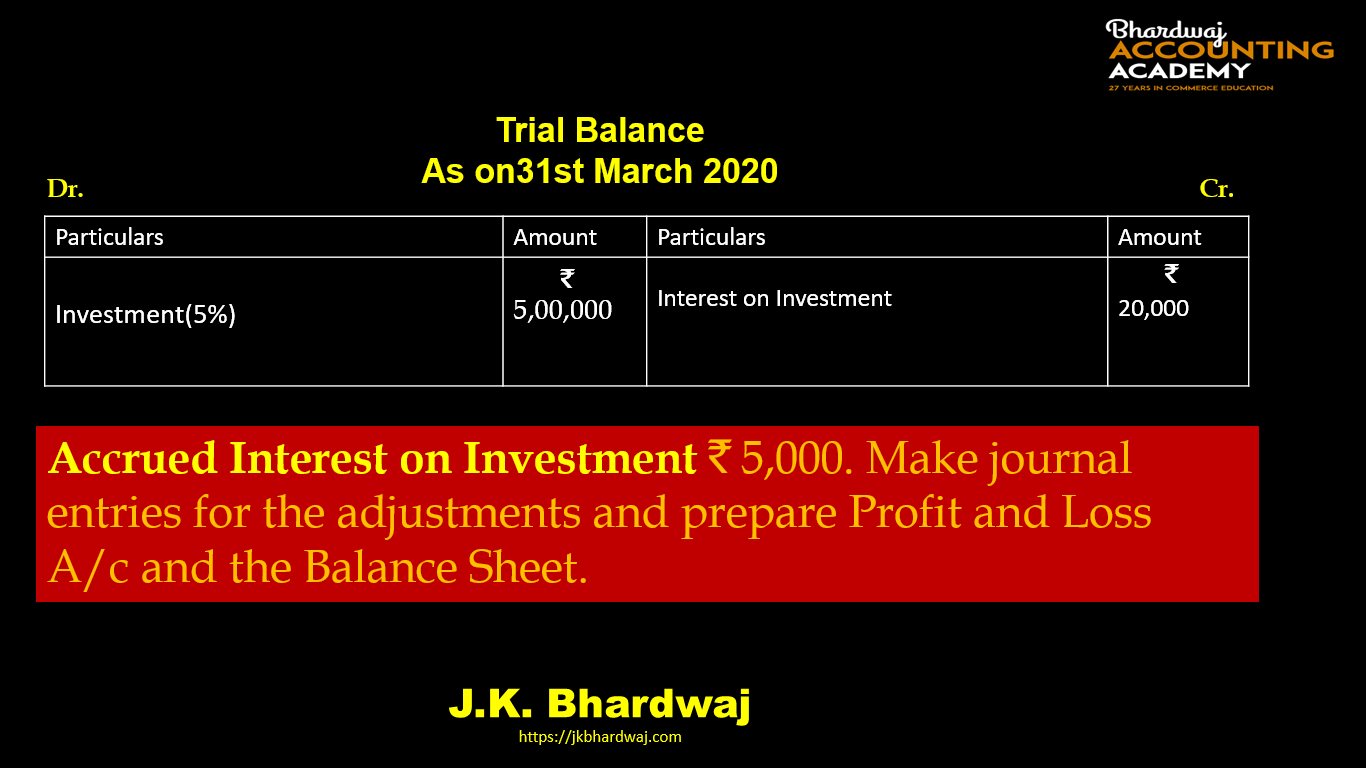 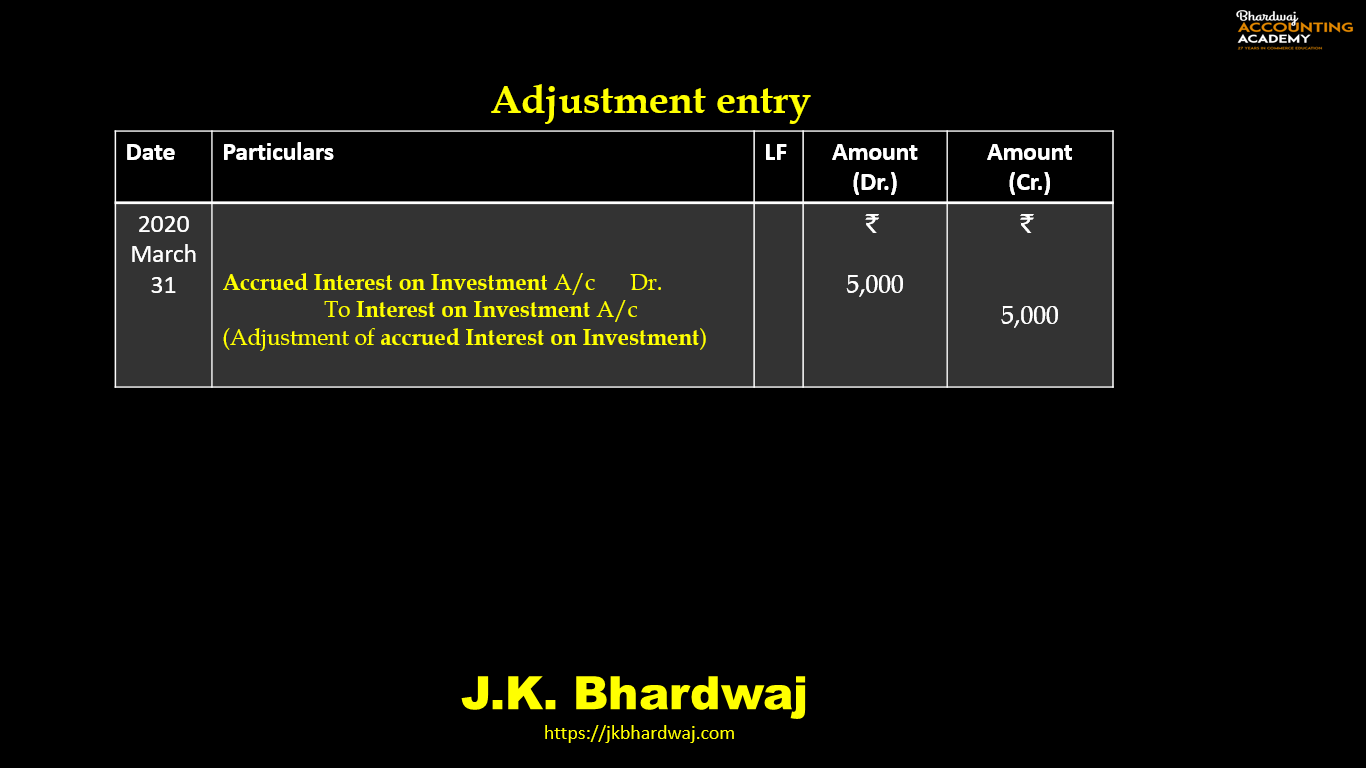 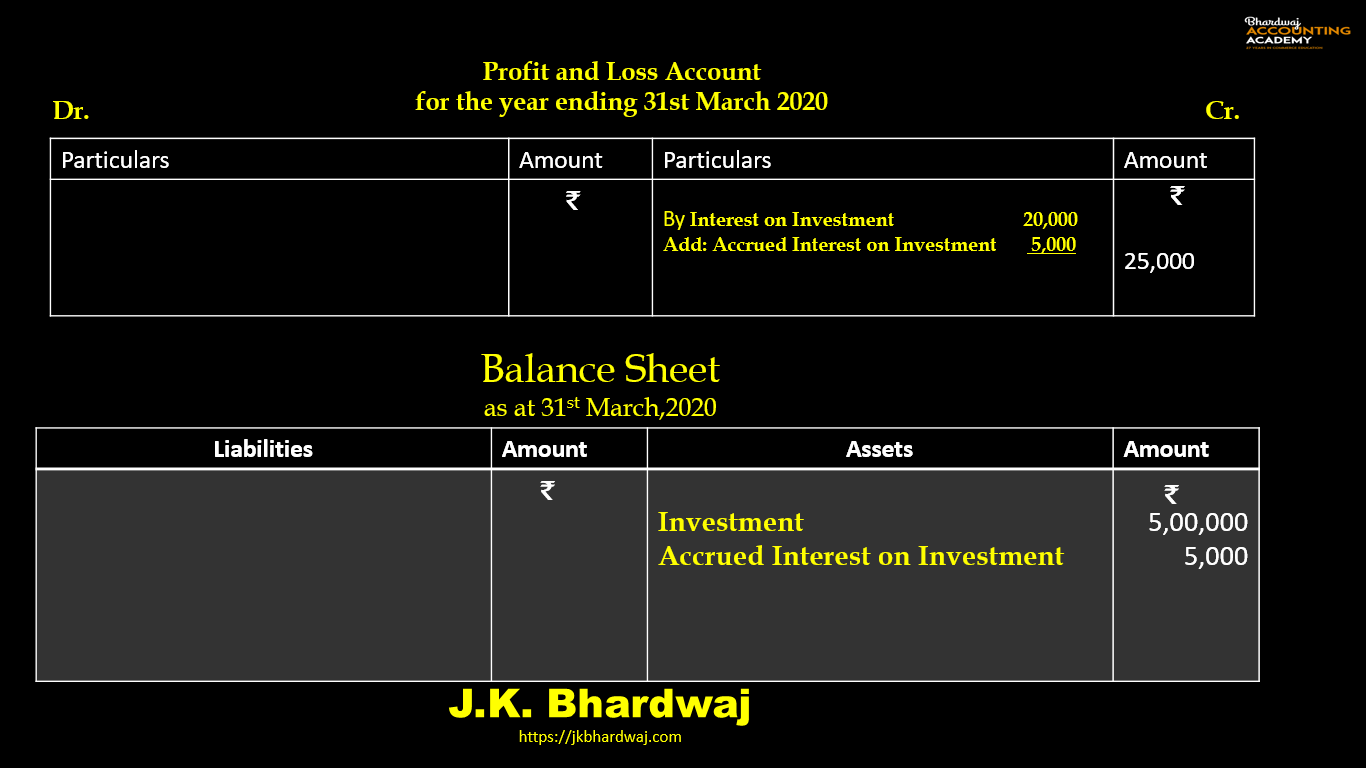 Sometimes income is received before it becomes actually due. Such income is called “unearned income” or “income received in advance”. Since this income does not relate to the accounting year, it should be deducted from the relevant head of income in the Profit & Loss A/c. It is a liability and hence is shown in the liability side of the Balance Sheet. Example of such income is rent that has been received for the months of April of the coming accounting year.

To Rent Received in Advance A/c

Deduct from the concerned income on the credit side of Profit & Loss A/c.

Show on the liabilities side of Balance Sheet.

If Advance Income given in trial balance-

Shown on the Liabilities side of the Balance Sheet. 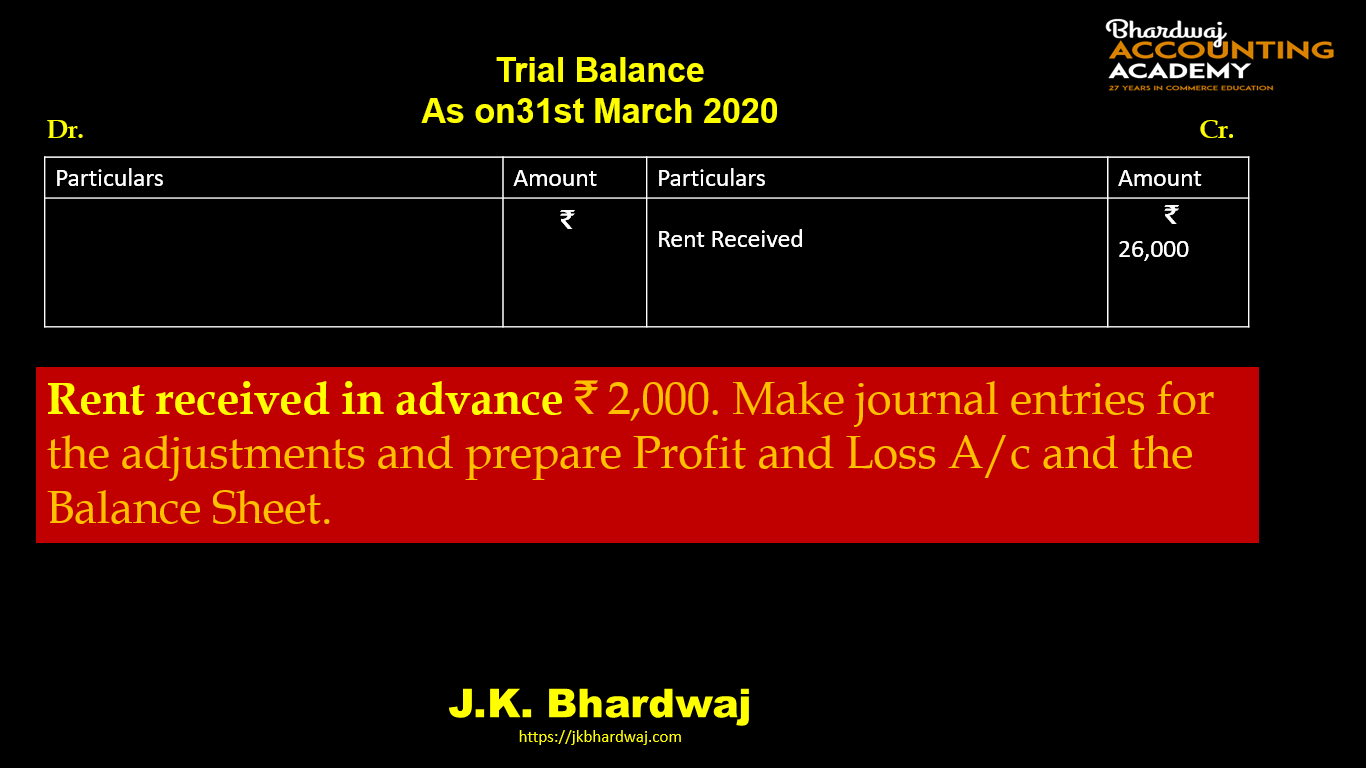 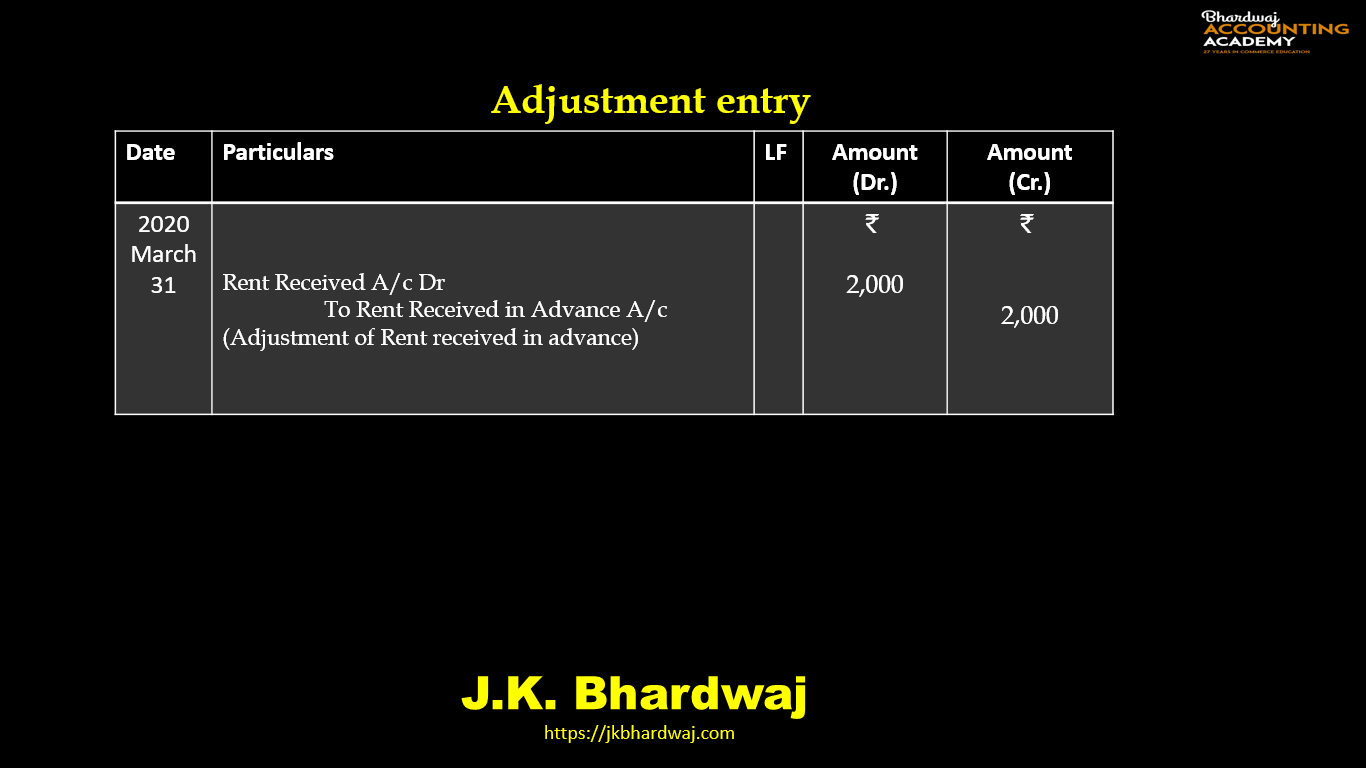 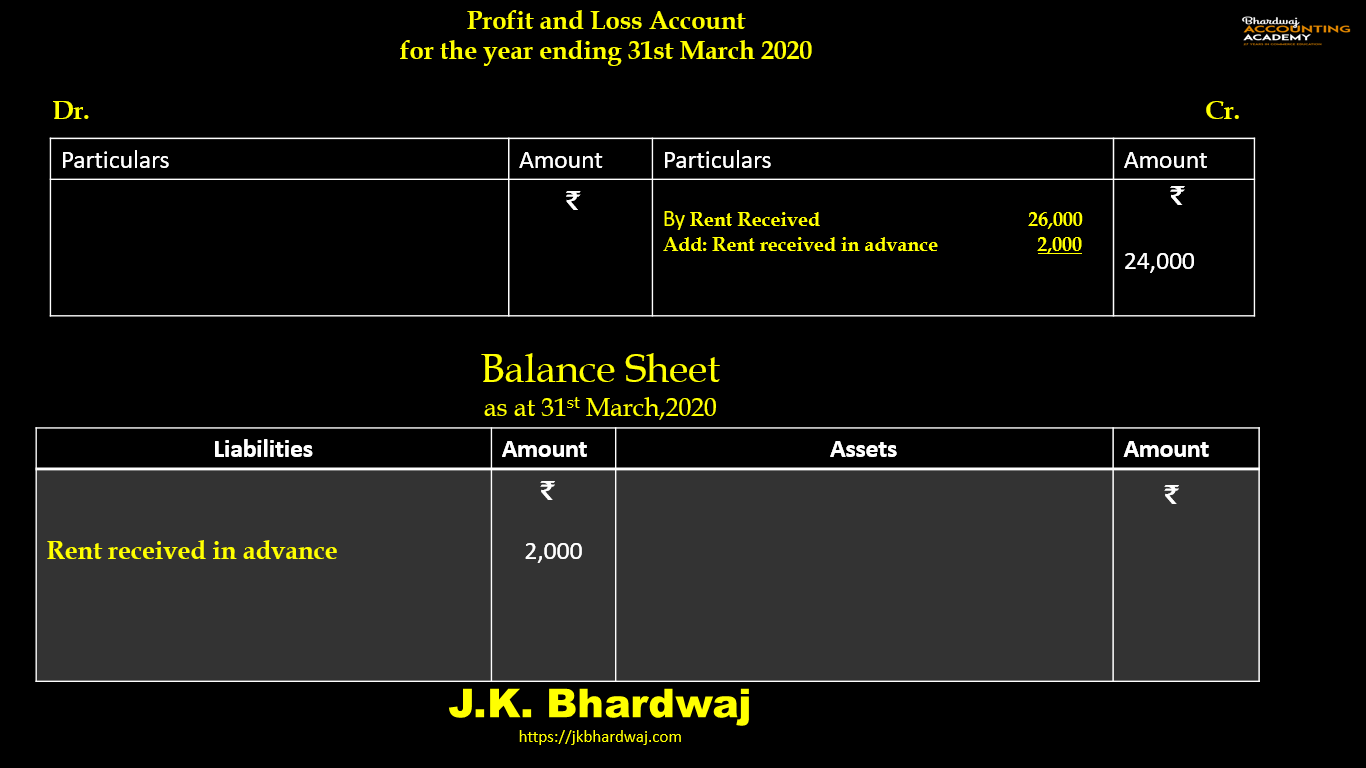 The gradual and permanent decrease in the value of  fixed assets due to normal wear and tear; passes of time and expected obsolescence in technology, known as depreciation.

In other words, the process of allocation of the cost of a fixed asset over its useful life is known as depreciation.

( Balance of Depreciation transferred to profit and loss A/c)

(ii)Deduct from the concerned assets on the assets side of Balance Sheet.

If Depreciation  given in trial balance-

* Recorded on the debit side of the profit and Loss A/c. 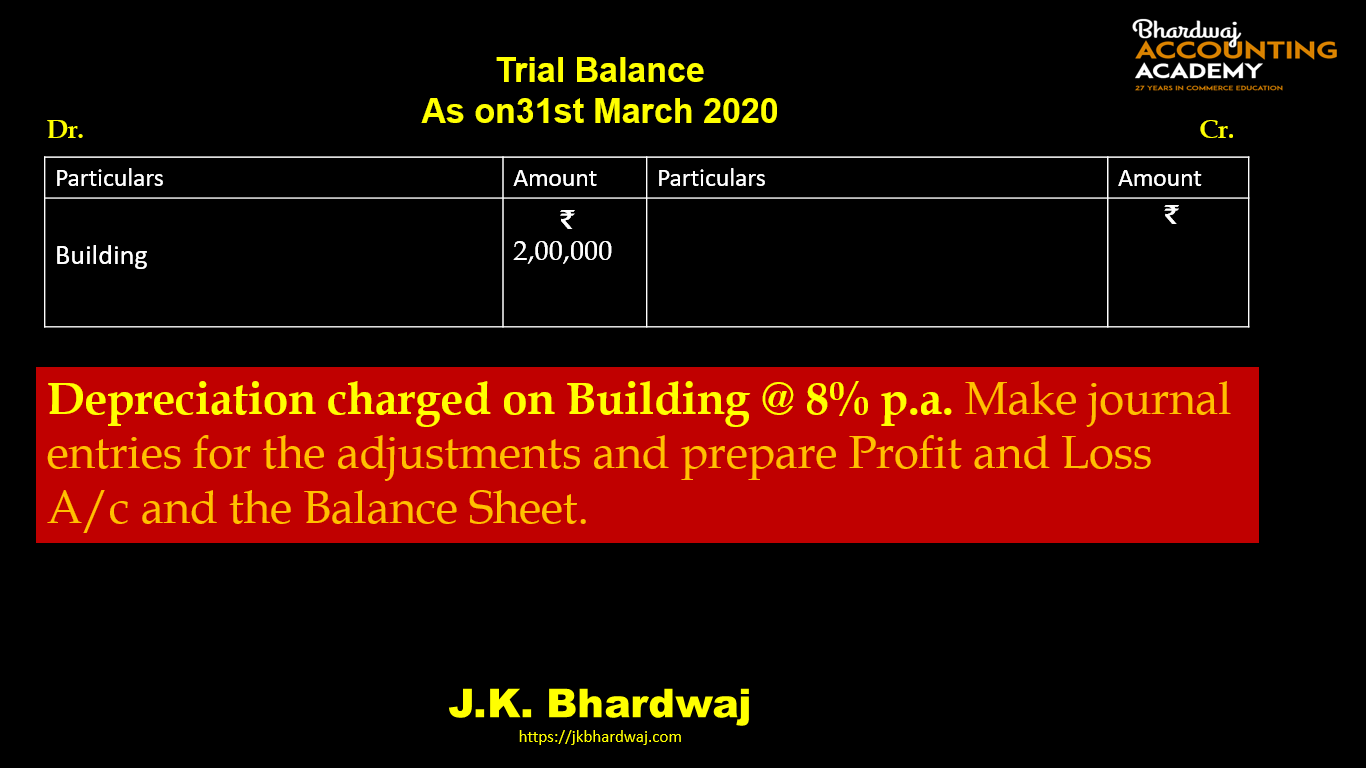 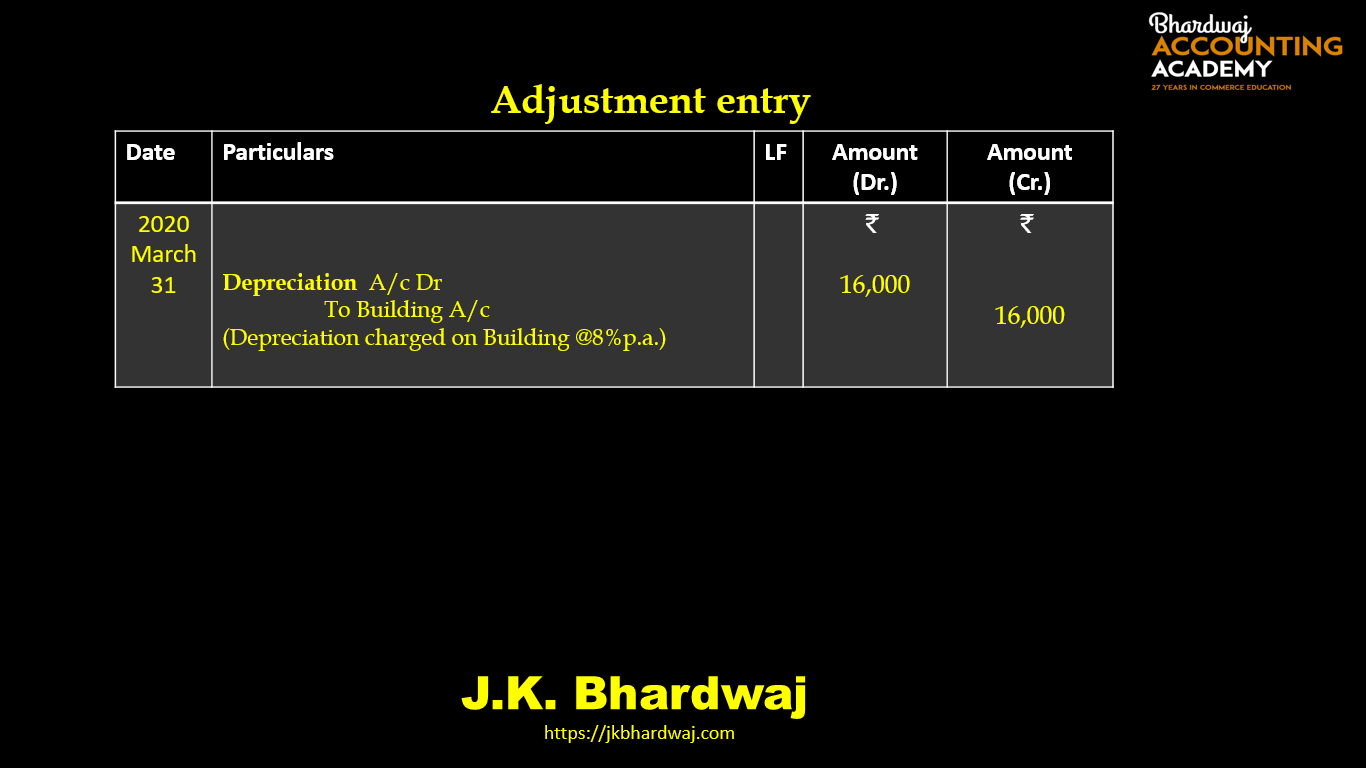 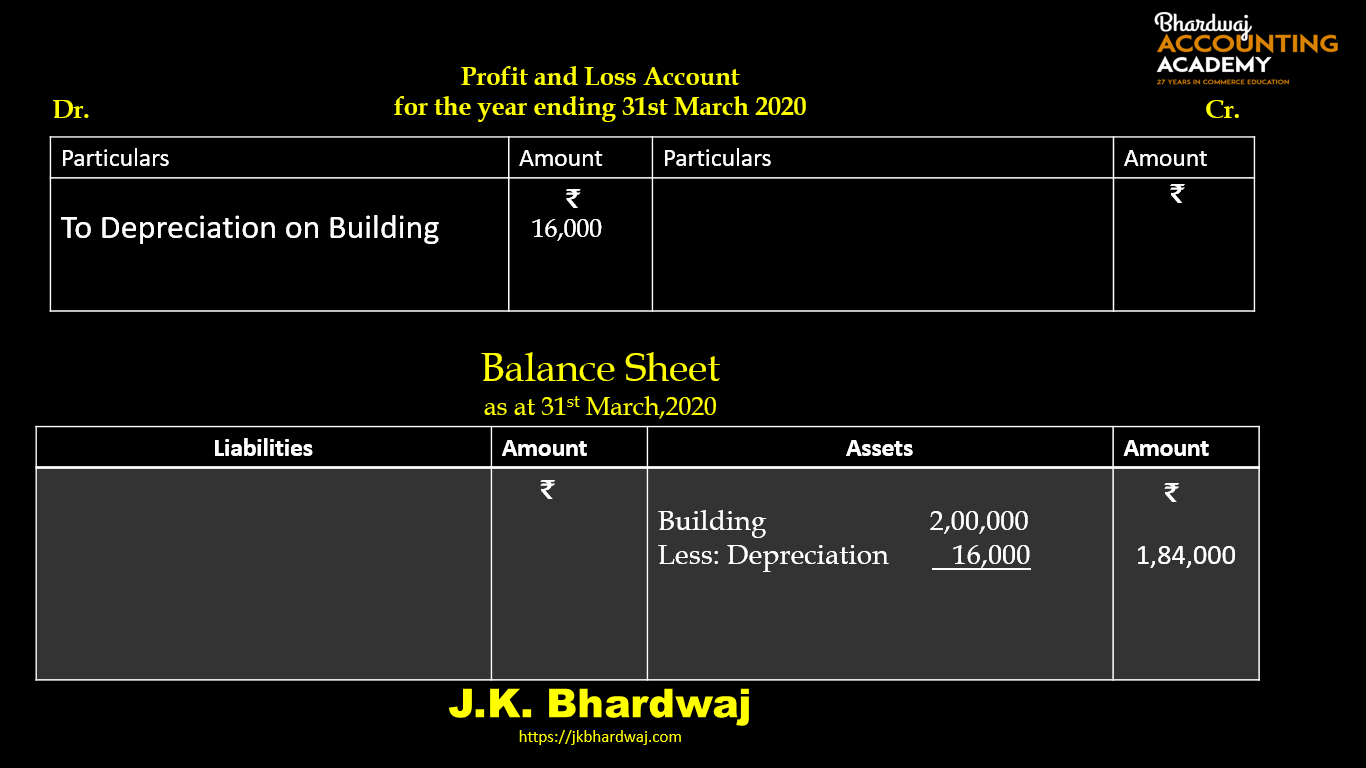 Bad Debts When the goods are sold on credit basis some of the debtors partly pay the due amount or do not pay at all. If this amount cannot be recovered at the end of the financial year, it  is called bad debts.

Bad Debts is a loss to the business enterprise.

Following adjustment entry is made for Bad Debts Written off  :

(ii)Deduct from the Debtors on the assets side of Balance Sheet.

If Bad debts given in trial balance-

* Recorded on the debit side of the profit and Loss A/c. 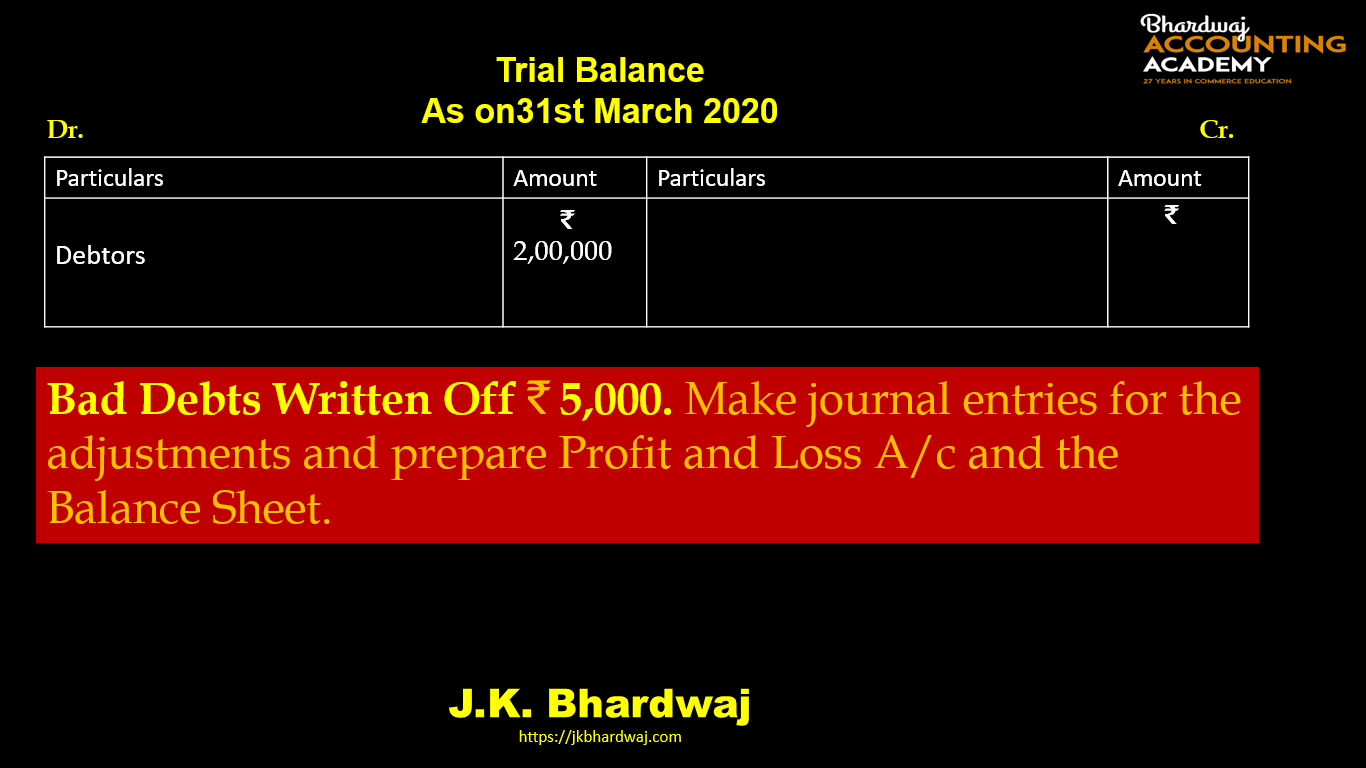 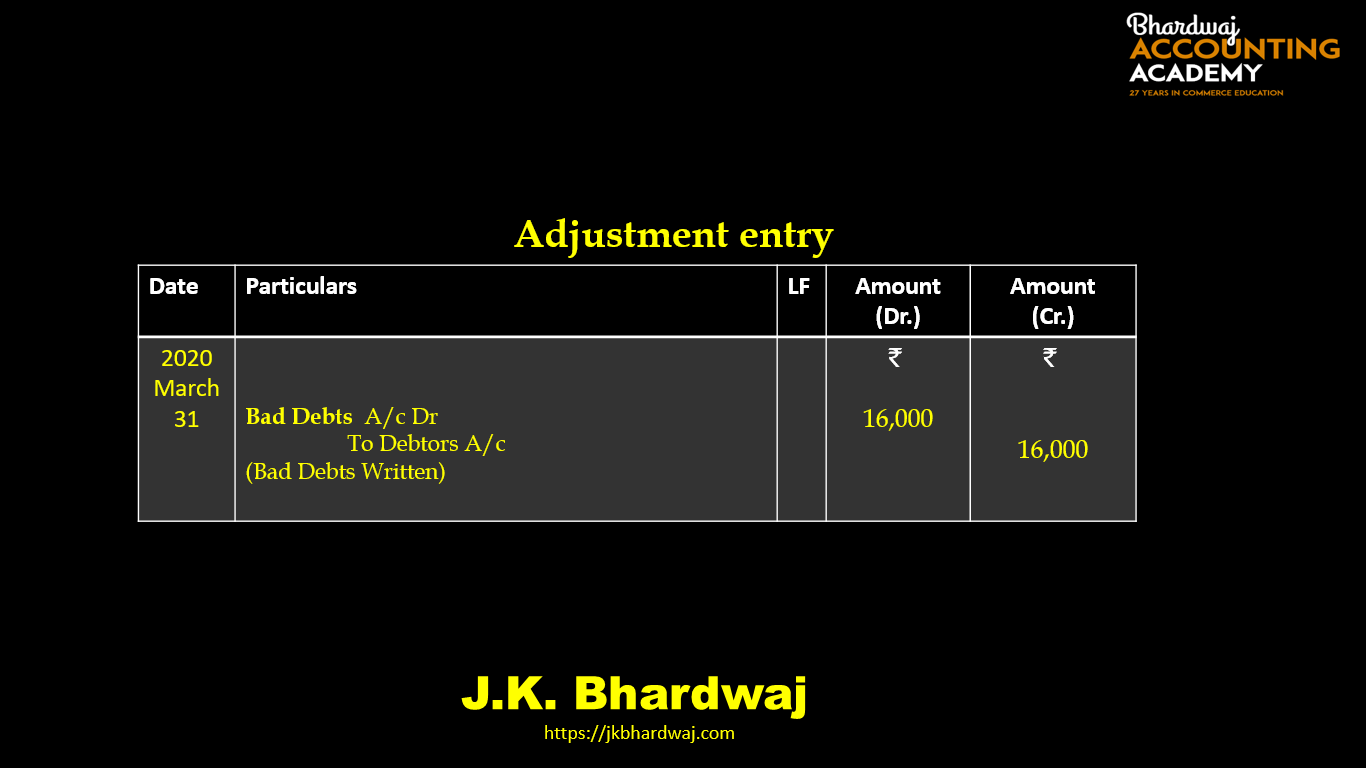 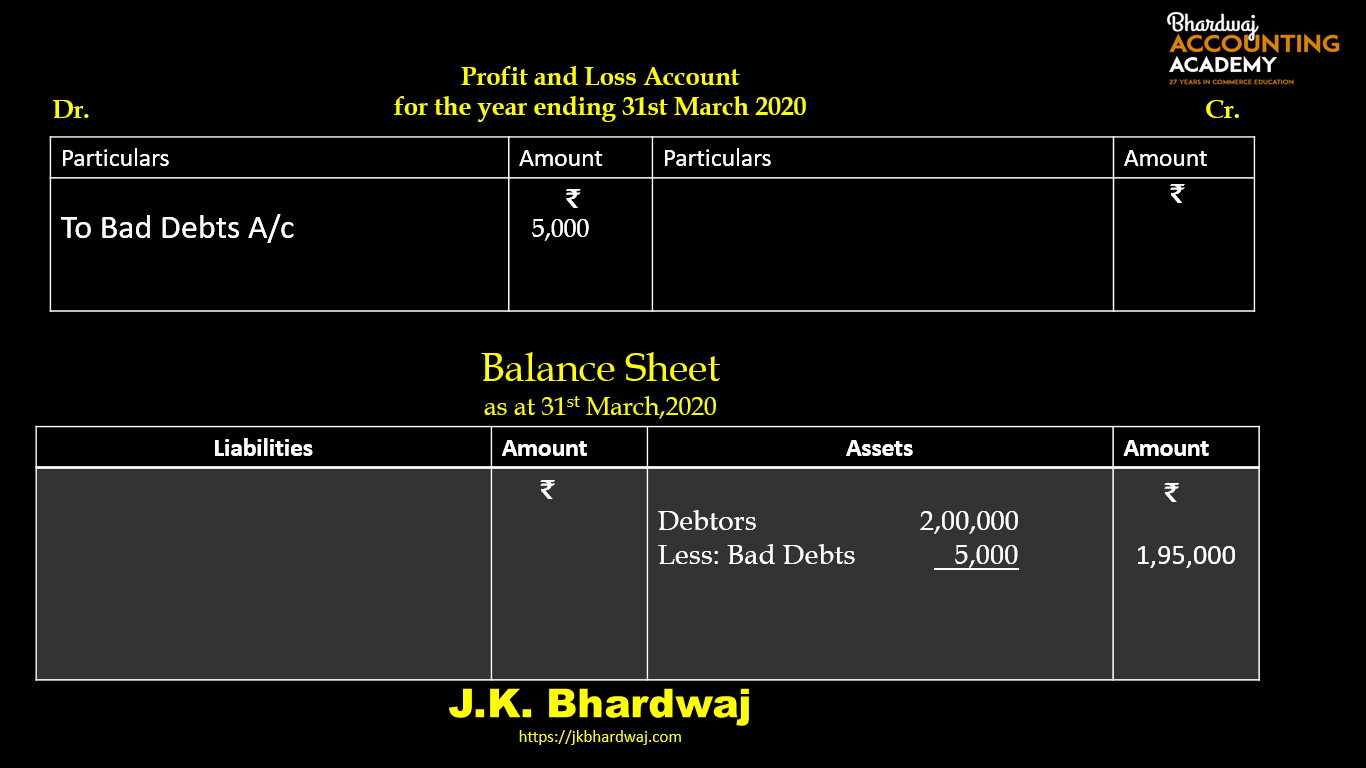 Provision for bad debts is the estimated percentage of total doubtful debt that needs to be written off during the next year.

Following adjustment entry is made for the Provision for Doubtful Debts :

To Provision for Doubtful Debts A/c

(ii)Deduct from the Debtors on the assets side of Balance Sheet. 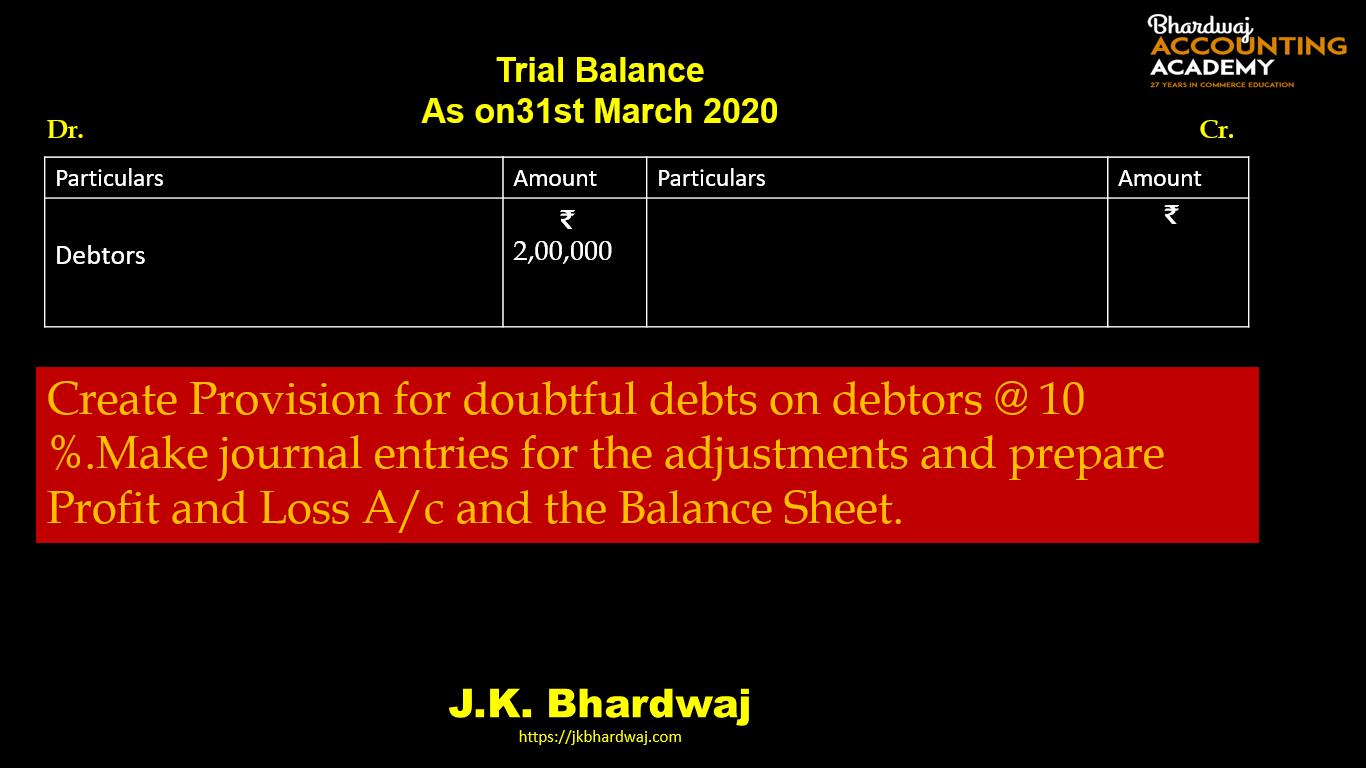 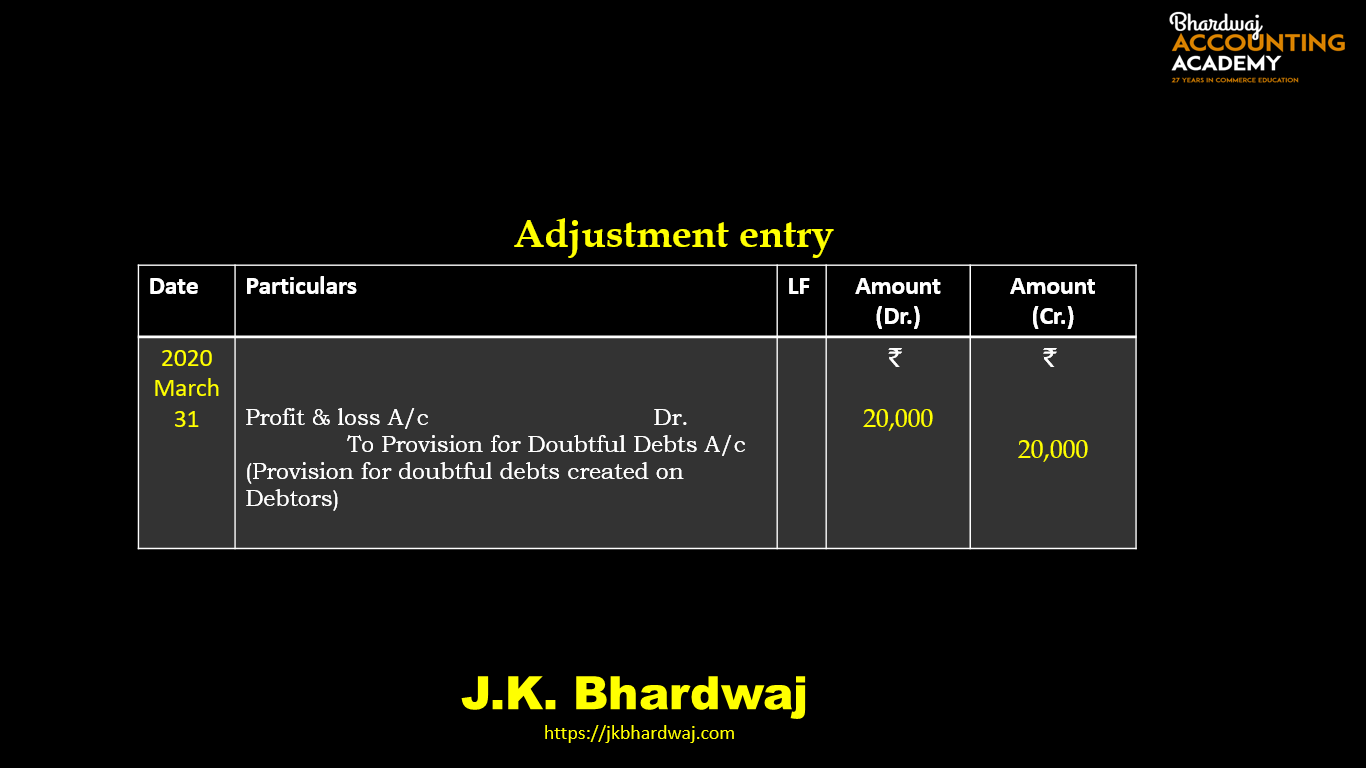 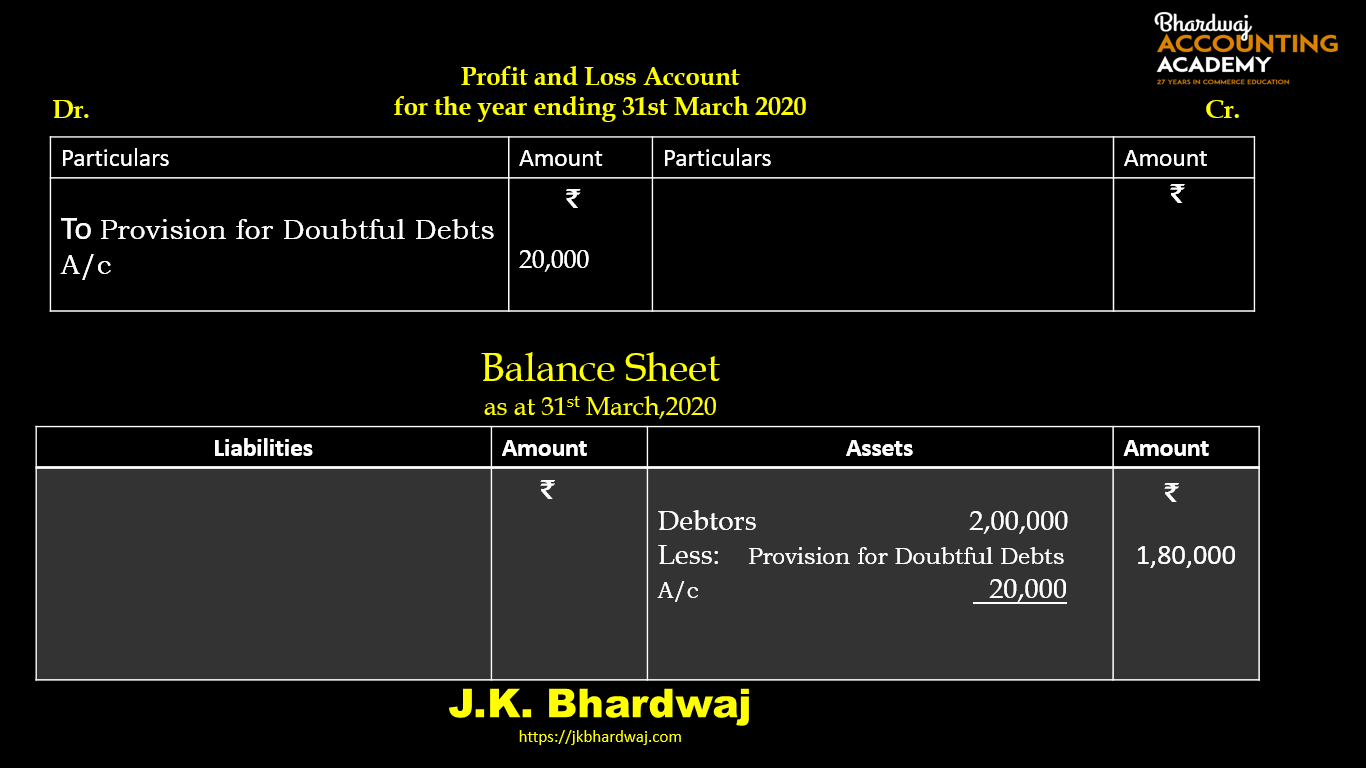