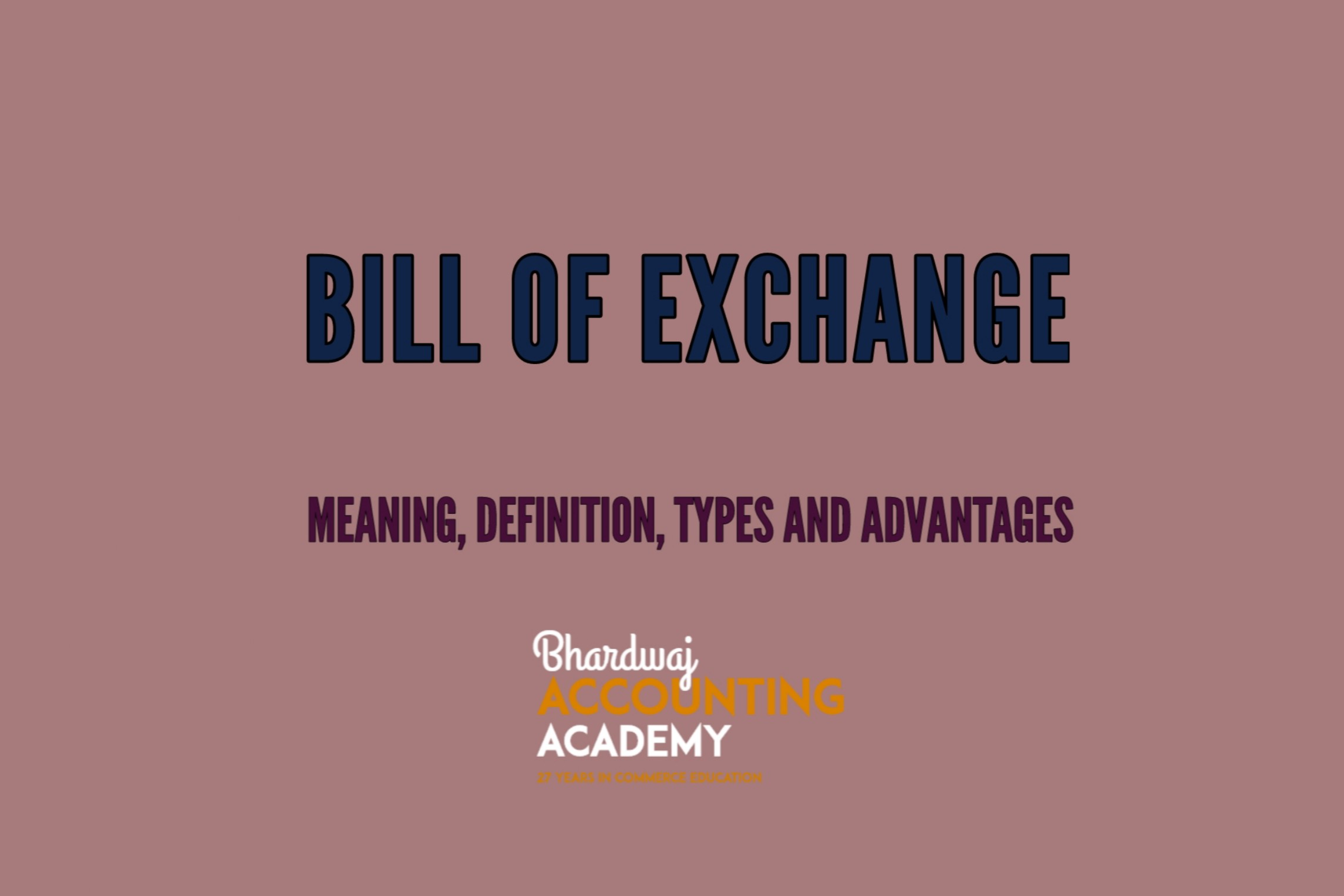 Bill of Exchange: Meaning and Types

In the present scenario, the sale and purchase of goods are done both on a cash basis and on a credit basis. In the case of credit transactions, the buyer is under an obligation to pay the amount after a specified period, In such a case, the seller prefers to get a written undertaking from the buyer to get the payment after a fixed period. So, the traders (buyer and seller) exchange has written documents containing agreements to ensure that the payment is made on the due date.

Both of these documents or instruments are legal instruments under the Negotiable Instrument Act, 1881. Let us have a detailed study of these two documents.

Meaning:  According to Section 5 of the Negotiable Instruments Act, 1881, “A Bill of Exchange is an instrument in writing, containing an unconditional order signed by the maker, directing a certain person to pay a certain sum of money only to, or to the order of, a certain person or to the bearer of the instrument”

Parties to a Bill of Exchange

A Bill of Exchange has the following three parties:
1. Drawer: The drawer is the person who writes or draws the Bill of Exclhange. He is a creditor who is entitled to receive money. The bill is signed by the drawer of the bill. Bill is not recorded in the books unless it is accepted by the drawee.
2. Drawee/Acceptor: A person on whom the bill of exchange is drawn for his acceptance is known as Drawee. He is the purchaser or debtor, who has to pay the money to the drawer. He is also known as ‘Acceptor’ as he accepts the bill. The bill is recorded in the books only after its acceptance.
3. Payee: Payee is the person named in the Bill of Exchange to whom the payment is to be made. Payee may be the Drawer himself or a third party. Example for Better Understanding: Suppose, Mohit sells goods on 1s April, 2020 for Rs. 85,000 to Rachit at a credit of 3 months. To secure the payment, Mohit draws a bill on Rachit, who accepts it and returns it to Mohit. In the given example: •Mohit is the drawer of the Bill; Rachit is the drawee of the bill. Moreover, Mohit is the Drawer as well as Payee of the bill. If Mohit endorses this bill to Rohit then Rohit will become the payee.
The Specimen Form of the given bill will be….
Also check: ISC COMMERCE SAMPLE PAPER YEAR-2021

According to secton 4 of the Negotiable Instruments Act, 1881, A Promissory Note is an instrument in writing (not being a bank note or a currency note) containing an unconditional undertaking signed by the maker to pay a certain sum of money only to or to the order of a certain person.
Promissory Note is an unconditional undertaking in writing by the maker to pay the specified amount to the specified person or to the bearer of the promissory note.

Features of a Promissory Note

Parties of a Promissory Note

Types of Bill of Exchange

Advantages of Bill of Exchange

The main advantages of Bill of Exchange are:
1. Helpful in Purchase and Sale of Goods on Credit: Sale and purchase of goods on credit becomes convenient and safe as Bill of Exchange serves as a written evidence of debt. The seller has a written commitment from the buyer to make the payment on a certain date.
2. Easy to Recover the Amount: A Bill of Exchange is a legal document. If the drawee fails to make the payment on the due date, then it is easier to recover the amount as the bill can be used as an evidence in the court.
3. Discounting Facility: A Bill of Exchange is drawn for a specified period. However, in case of need, drawer can get the bill discounted from the bank and can receive the payment against the bill before its due date.
4. Facilitates Endorsement: As Bill of Exchange is a negotiable instrument, it can be easily transferred (endorsed) to other parties in settlement of debts.
5. No need to remind the debtor: The drawer is relieved from sending reminders to the drawee to make the payment as the date of payment is fixed and written on the bill of exchange.
6. Valid Evidence of Debt: Bill of Exchange written acknowledgement of debt, which is duly signed and stamped. Moreover, it is legal document, so it can be used as an evidence in case of any default.
7. Helps in Planning Cash Management: The drawer and drawee are aware of the date of receipt/payment of the bill. So, both the parties can plan their cash operations.
8. Convenient means of making Foreign Payment: Bills of Exchange is a convenient means of remittance of money in case of foreign trade.
Also Read: Closing Entries – Meaning, Types And Examples

Due date is the date on which the payment of the bill is due. Due date is ascertained in the following manner :

Due date is the date on which a bill is presented for the payment.

Due Date = Date of Drawing + Term of Bill.

Due date = Date of Acceptance + Term of Bill.

Drawee is allowed three extra days after the due date of bill for making payments. Such 3 days are known as ‘Days of Grace’. It is a custom to add the days of grace.

The date which comes after adding three days of grace to the due date of a bill is called ‘Date of maturity’.

When no time for payment is mentioned in the bill of exchange and the bill is payable whenever it is presented to the drawee for the payment, such bills are known as “Bill at sight” or “Bill on Demand”. 3 days of grace are not allowed when bill is payable on demand.

Bill after date is the bill in which due date and date of maturity is ascertained from the date on which the bill is drawn.

3 days of grace are allowed for ascertaining the date of maturity in case of bill after date.

When the bill is encashed from the bank before its due date, it is known as discounting of bill. Bank deducts its charges from the amount of bill and disburses the balance amount.

Endorsement of a bill means the Process of transferring the title of bill from the drawer or holder to their creditors.

The person transferring the title is called ” Endorser” and the person to whom the bill is transferred called ‘Endorsee’. The endorsee can further endorse the bill in favor of his creditors. Endorsement is executed by putting the signature at the back of the bill.

It is a process when the bill is sent to the bank with instructions to keep the bill till maturity and collect its amount from the acceptor on the date of maturity.

When the drawee (or acceptor) of the bill fails to make payment of the bill on the date of maturity, it is called ‘Dishonour of Bill.

To obtain the proof of dishonour of a bill, it is re-sent to the drawee through a legally authorized persons called Notary Public. Notary Public charges a small fee for Providing this service known as noting charges.

Noting charges are paid to the Notary Public first by the holder of the bill but are ultimately recovered from the drawee, because he is the person responsible for the dishonour.

When the drawee makes the payment of the bill before its due date it is called ‘Retirement of a bill’.

In such a case, holder of the bill usually allow a certain amount as Rebate to the drawee. Amount of rebate is calculated at a fixed percentage for the unexpired period only.

Sometimes, the drawee of a bill finds himself unable to meet the bill on due date. To avoid dishonouring of bill, he may request the holder of the bill to cancel the original bill and draw a new bill in place of old one. It the holder agrees, the old bill is cancelled and a new bill with new terms is drawn on the drawee and also accepted by him. This process is called ‘Renewal of a bill’. In this case, Noting of the bill is not required as cancellation of the bill is mutually agreed upon by both the parties of the bill.

Normally, the drawer charge interest for the period of new bill. The interest may be paid in cash or may be added in the amount of new bill. If any part payment is made at the time of renewal of a bill, interest is calculated only on the outstanding amount.

When bills of exchange or promissory note are not drawn to settle a trade between drawer and drawee but are written for the purpose of mutual help and to raise funds temporarily then it is known as Accommodation bill.

When the drawee (i.e., acceptor) of a bill is unable to meet his liabilities on due date, the drawee become insolvent. In such a case, entries for the dishonour of the bill are passed in the books of drawer/holder and drawee of the bill.

Any proportionate amount received from the drawee is recorded in the books of the holder and the amount unrecoverable is debited to ‘Bad Debts A/c’.

1 thought on “Bill of Exchange: Meaning and Types”