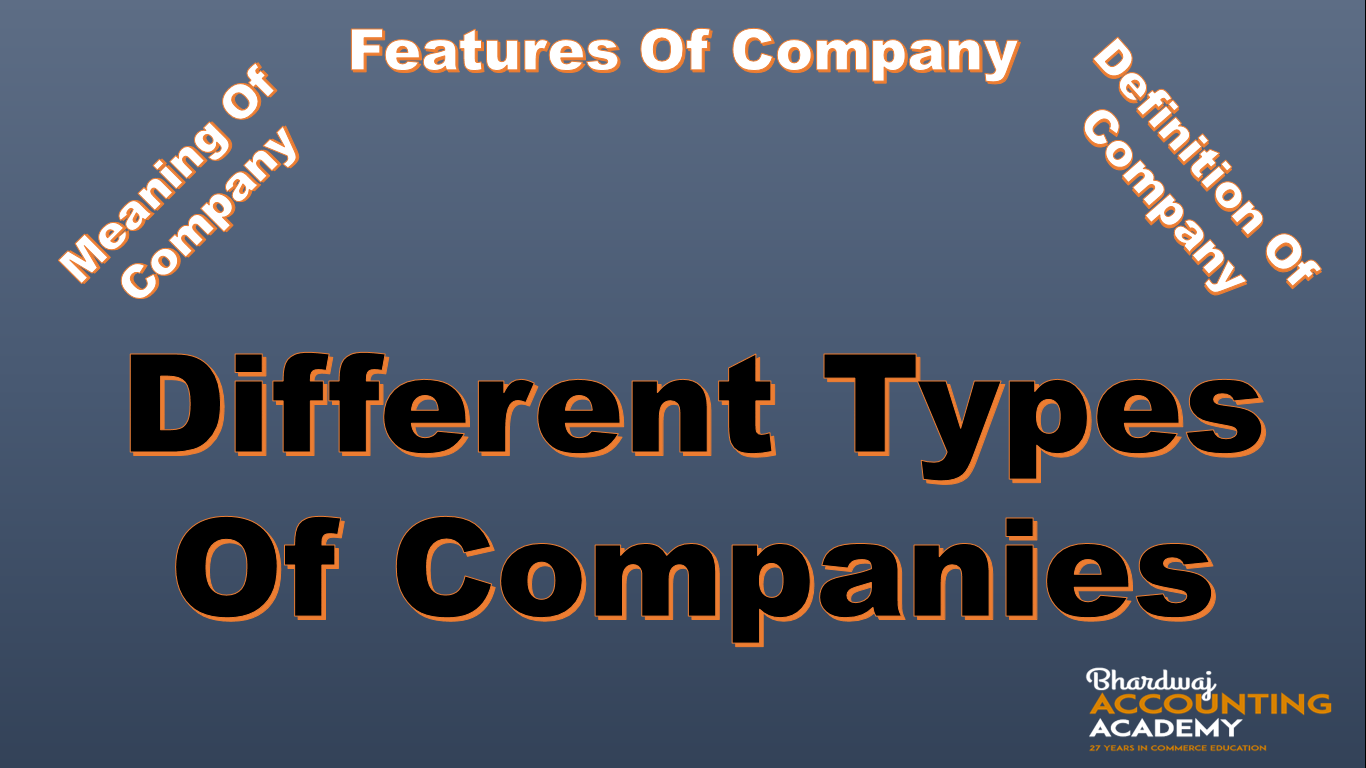 “ A company is a voluntary association of persons formed for carrying out business activities and has a legal status independent of its members. A company is an artificial person created by law having separated legal entity with perpetual succession and common seal (which act as the official signature of the company), The liability of members of a company is limited and Capital divisible into parts, known as shares, A shareholder can transfer his shares to any person without the consent of other members”.

According to Prof. L.H. Haney, “Company is an artificial person created by law having separated entity with a perpetual succession and common seal”.
According to Justice Lindley, “a company means an association of persons who contribute in shape of money or money’s worth to a common stock and employ it for some specific purpose”.

According to Justice James, “A company is an association of persons united for a common object”.

According to Kimball and Kimball, “A corporation is by nature an artificial person created or authorized by the legal stature for some specific purpose.”

According to James Stephenson, “A company is an association of any persons who contribute money or money’s worth to a common stock and employs it in some trade or business, and who share the profit and loss (as the case may be) arising therefrom.”

Section 2(20) of the Companies Act, 2013 states that a company means any association of person registered (Incorporated) under the present or the previous companies act.

1. Artificial Person- A joint-stock company is an artificial person, having no body, no soul, and no conscience. In the sense that it is created by law and does not possess the physical attributes of a natural person. It cannot eat or walk, smile or marry, read or write. However, it has a legal status like a natural person, a company can own property, incur debts, borrow money, enter into contracts, sue, and be sued. It can conduct a lawful business and enter into contract with others.

2. Formation by Law or Incorporated Body- The formation of a joint-stock company is time-consuming and it involves preparation of several documents and compliance of several legal requirements before it starts its operation. A company comes into existence only
when it is registered under the Companies Act. Registration of company is compulsory.

3. Separate Legal Entity- On incorporation, a company acquires a separate legal existence of law. Being an artificial person, a company exists independent of its members. It can make contracts, purchase and sell things, employ people and conduct any lawful business in its own name. It can sue and can be sued in the court of law. A shareholder cannot be held responsible for the acts of the company.

5. Perpetual Existence- Company not affected by the death, lunacy, or insolvency of its shareholders. It can be winded up only by the law. According to Tennyson “For men may come, men may go, But I go on forever.” In the case of company it may be said that members may come and members may go but the company goes on. A company being a creation of the law can be brought to an end only by law.

6. Capital Divisible into Shares- A joint-stock company divides its capital into units of equal denomination, Each unit is called a share.

8. Transferability of Shares- The members of the company (Public company) are free to transfer the shares held by them to others as and when they like. They do not need the consent of other shareholders to transfer their shares.

9. Democratic Management or Representative Management- You know that people of different categories and areas contribute towards the capital of a company. So, it is not possible for them to look after the day-to-day management of the company. They may take part in deciding the general policies of the company but the day-to-day affairs of the
company is managed by their elected representatives, called Directors.

10. Risk bearing: The risk of losses in a company is borne by all the shareholders. In the face of financial difficulties, all shareholders in a company have to contribute to the debts to the extent of their shares in the company’s capital.

A. On the Basis of the mode of Incorporation

B.On the Basis of Liability of Members

C. On the Basis of Public Interest

D. On the Basis of Ownership and Control

E. On the Basis of Nationality or Jurisdiction

A. On the Basis of the mode of Incorporation

1. Chartered Company- A chartered company is an association with investors or shareholders that is incorporated and established by the royal charter or under a special order granted by the King or queen.

These types of company has a special purpose of trade, exploration, and/or colonization. These companies enjoy some exclusive powers and privileges. Such a Company can be set up only in the countries having Monarchy.

Examples: The East India Company, the Bank of England, the Chartered Bank of Australia etc. are the example of chartered company.

2. Statutory Company- Statutory companies are public enterprises brought into existence by a Special Act of the Parliament. The Act defines its powers and functions, rules and regulations governing its employees and its relationship with government departments, therefore, such a company is not required to have a Memorandum of Association and it need not use the word ‘Limited’ against its name.
Though primarily they are governed under that Special Act, still the Companies Act, 2013 will be applicable to them.
These companies are formed mainly with the intention to provide public services like gas, water, electricity, etc. These companies are also known as Statutory corporations or public corporations.

3. Registered Company- A Company registered under the Company Act is called Registered or Incorporated Company. Such company are most common in Practice. An incorporated company has a separate legal entity on its own, recognized by the law. These corporations can be identified with terms like ‘Inc’ or ‘Limited’ in their names. It becomes a
corporate legal entity completely separate from its owners.

B.On the Basis of Liability of Members

2. Company Limited by Shares- Sometimes, shareholders of some companies might not pay the entire value of their shares in one go. In these companies, the liabilities of members is limited to the extent of the amount not paid by them on their shares.
This means that in case of winding up, members will be liable only until they pay the remaining amount of their shares.

3. Company Limited by Guarantee- In some companies, the memorandum of association mentions amounts of money that some members guarantee to pay.

In case of winding up, they will be liable only to pay only the amount so guaranteed. The company or its creditors cannot compel them to pay any more money.

C. On the Basis of Public Interest

Public Company
1. Members: Minimum 7, Maximum unlimited
2. Minimum number of directors: 3(three)
3. Minimum paid-up capital: 5 lakhs. (Now there is no minimum paid-up share capital requirement for a public company).
4. Index of members: Compulsory.
5. Transfer of shares: Shares can be transferred easily from one person to another.
6. Invitation to the public: It can invite the public to purchase the share and debentures.
7. Maximum number of directors: 15(Fifteen)

1. Members: Minimum 2, Maximum -200.
2. Minimum number of directors: 2
3. Minimum paid-up capital: 1 lakh (Now there is no minimum paid-up share capital requirement for a private company.
4. Index of members: Not compulsory.
5. Transfer of shares: Shares cannot be transferred from one person to another.
6. Invitation to the public: It cannot invite the public to purchase the share and debentures.
7.  Maximum number of directors: 15(Fifteen)

Note – COMPANIES (AMENDMENT) ACT, 2015
The Companies (Amendment) Bill, 2014, seeking to make certain amendments to the Companies Act, 2013 (“Act”), had been introduced in the Parliament on December 2, 2014. The bill received Presidential assent on May 25, 2015, and has finally been notified in the Official Gazette (“Amendment Act”). The provisions of the Amendment Act shall come into force on the dates appointed by the Central Government in this regard.

The Amendment Act omits requirements for such minimum paid-up share capital. It is a welcome change as companies can now be set up without having to arrange for any minimum capital. It is pertinent to note that, post this amendment, Sections 2 (68) and 2 (71) continue to retain the words “minimum paid-up share capital as may be prescribed”. Hence, the Parliament has given the Central Government a right to prescribe a minimum capital requirement in the future.

3. One-Person Company- These kinds of companies have only one member as their sole shareholder. They are separate from sole proprietorships because OPCs are legal entities distinct from their sole members. Unlike other companies, OPCs don’t need to have any minimum share capital.

As per provision of section 2(62) of the Companies Act, 2013 defined “one person company” means a company which has only one person as member.

Any natural person (should not be minor) who is an Indian citizen whether a resident in India or not i.e. NRI  shall be eligible to  incorporate a One Person Company and appoint nominee of an OPC,Timeline for Non-resident individuals has been reduced to 120 days.

D. On the Basis of Ownership and Control

E. On the Basis of Nationality or Jurisdiction

Indian Company- A company registered in India as per the Indian Companies Act is known as Indian/domestic company.

Foreign Company-A company which is incorporated in a country outside India
and having a business operation in India, is known as a Foreign company.

The term ‘foreign company’ is clearly laid down under Section 2 sub-section 42 of the Companies Act, 2013  A foreign company is any company or body corporate incorporated outside India which,

Multi-National Company- A company which is registered in one country but carries on business in a number of other countries.