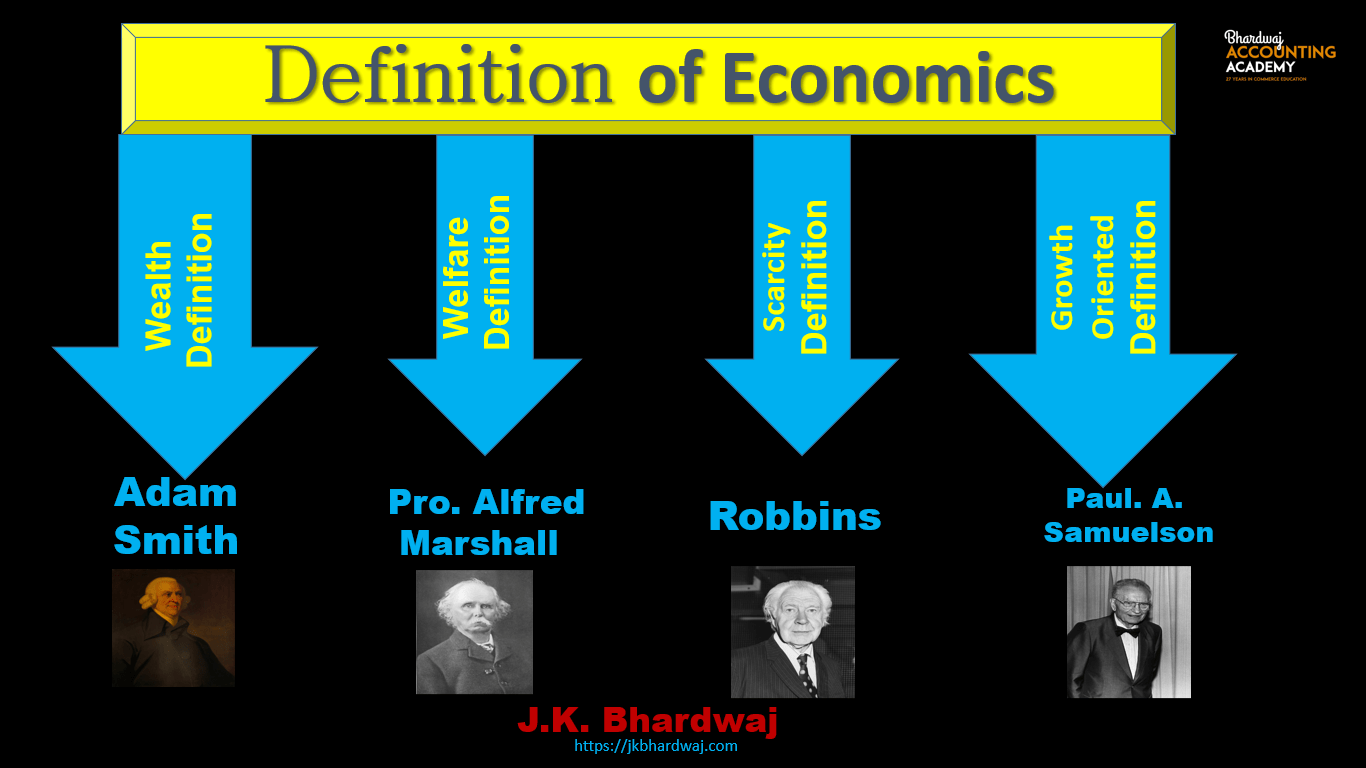 “Economics is a Branch of  social (behavior of people living in society) science (study of theories in the systematic ways) which study  of how society uses its limited (scarce) resources, which have alternative uses, to produce goods and services and to distribute them among different group of people (Society) It makes sure that all the available resources are put to best use”. 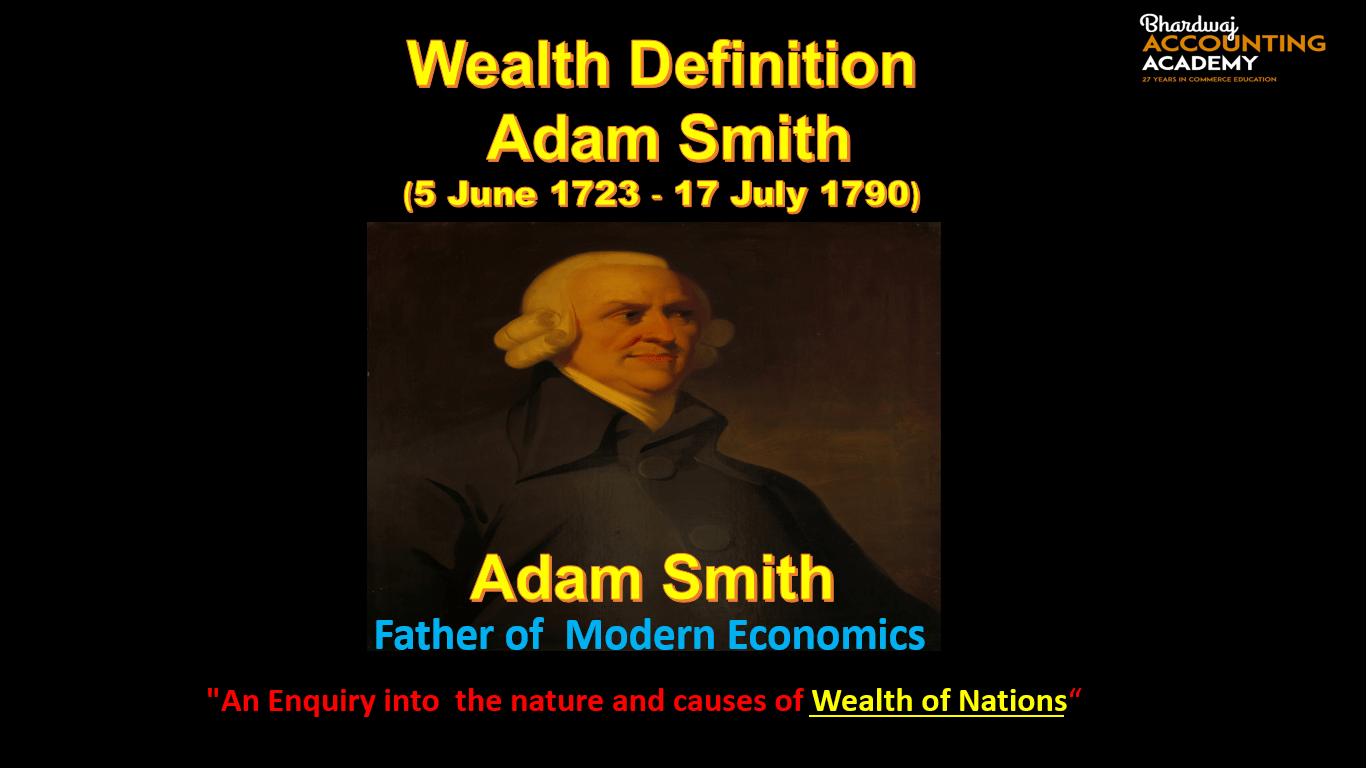 “Economics as A science which enquires into the nature and causes of wealth of nations, and it related to the laws of production, exchange, distribution and consumption of wealth”.

“Economics is the science of wealth”.

The main features of Wealth definitions are follows:

1.Study of Wealth: According to the wealth definition, economics is the study of wealth only. The main object of economics is to examine how people earn wealth and spend it. Wealth has been made the focal point of economics by the classical economists.

2.Causes of Wealth: Economics seeks to examine causes which lead to an increase of wealth, Wealth can be increased by its production and accumulation.

The main aim of an economy is to become rich. Hence, it gives more stress on wealth not anything else.

1.Too Much Importance to Wealth

Definition of Economics by Adam Smith gives primary importance to wealth and secondary to human being. This emphasis has now shifted from wealth to human being. Man occupies primary place and wealth a secondary one. The real fact is that man is more important than study of wealth.

According to this main objective of human activities is only to earn more and more wealth. in others words he earns only for his self interest and social interest is completely ignored.

The other objection by Marshall is that mans welfare has not been mentioned in Adam’s definition of economics. He has stressed much on wealth.  Wealth is a means to an end, the end being the human welfare.

5. It ignores the problem of Scarcity 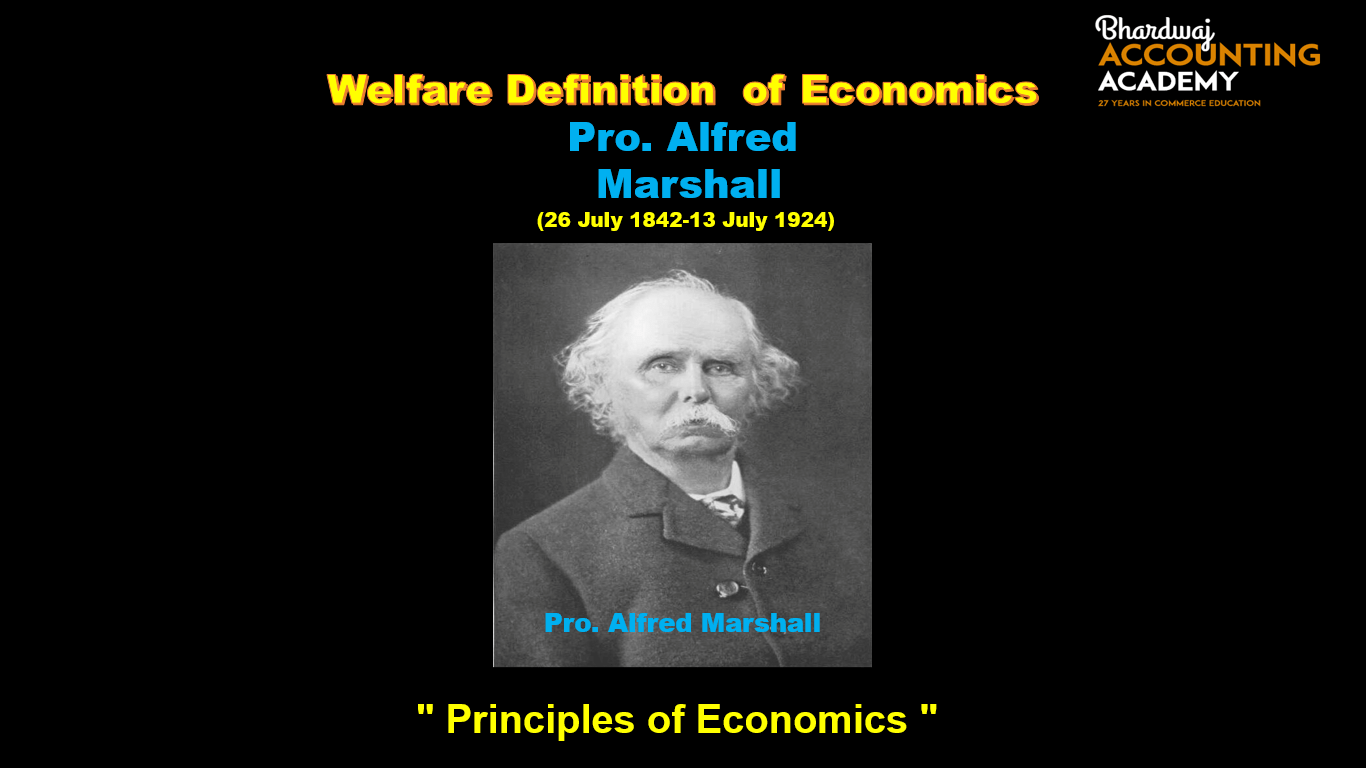 ” Economics is a study of mankind in the ordinary business of life; it inquires how he gets his income and how he uses it. it examines that part of individual and social action which is most closely connected with the attainment (acquisition) and with the use of the material requisites (Necessary or Essential) of wellbeing. Thus it is on the one side a study of wealth; and on the other, and more important side, a part of the study of man”.

1. Economics is a study of those activities that are concerned with material welfare of man.

2.Economics deals with the study of man in ordinary business of life.  Economics does not study of all the activities of man.

3. It studies about how people get their income, how they use it and how they make best use of their resources.

4. Economics is the study of personal and social activities concerned with material aspects of well being.

5.Economics is a Art an science.

6.It is a social science. A person who is cut away from the society is not the subject of study of economics.

7.Man is the center of his study.

8.Economics studies how people try ‘to increase the material means of well-being.

9.It takes into account the money-earning and money-spending activities of man.

10.Economics studies only the ‘material’ part of human welfare which is measurable in terms of the measuring rod of money.

1. Marshall ignores the non material services like the services of teacher, services of doctor, which has an important contribution of economic welfare.

3. Marshall’s definition aimed at measuring human welfare in terms of money.  But ‘welfare’ is not amenable to measure­ment, since ‘welfare’ is an abstract, subjective concept.  Truly speaking, money can never be a measure of welfare.

5.Finally, Marshall’s definition ignores the fundamental problem of scarcity of any economy.

6. Prof. Marshall has not explained the meaning of wealth clearly. 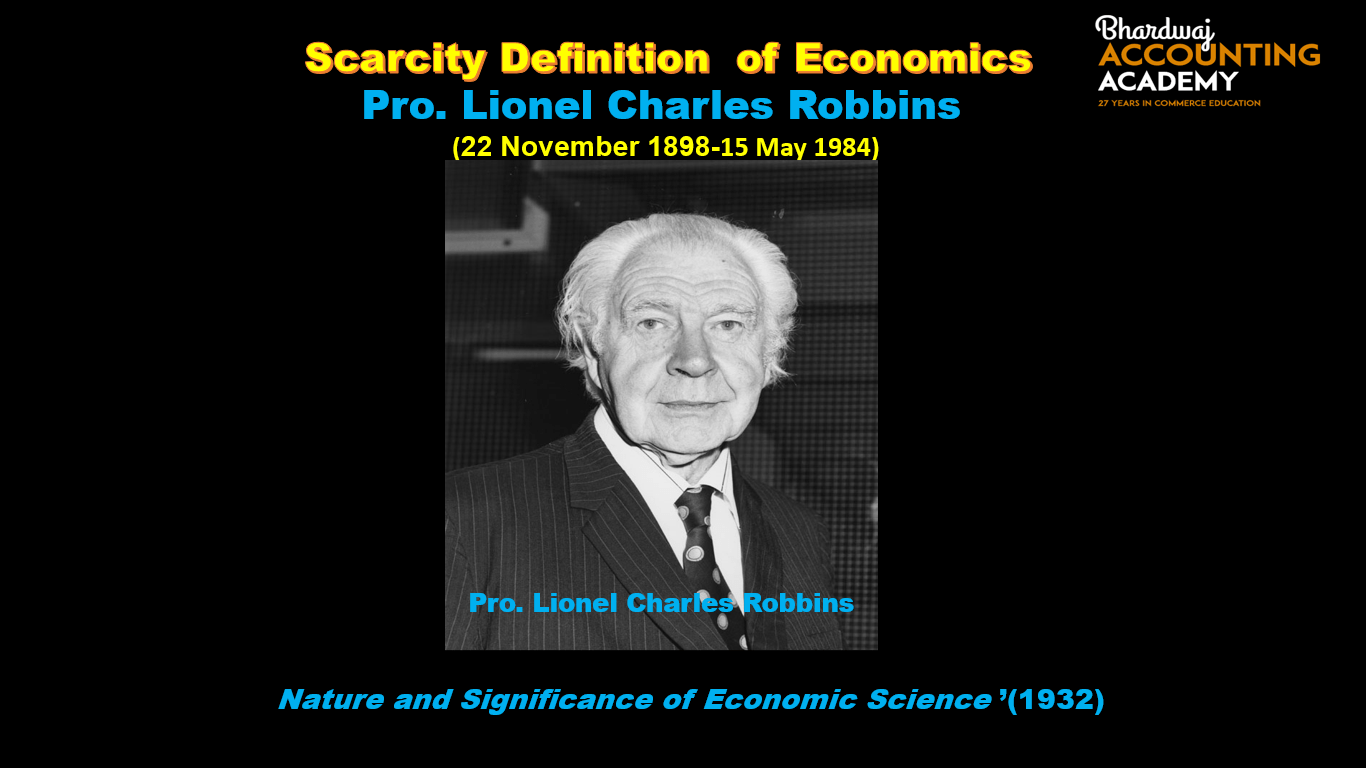 “Economics is a science which studies human behaviour as a relationship between ends and scarce means which have alternative uses”.

Wants= Wants is an effective desire for a particular  thing, which can be satisfied by making an effort  to acquire it.

Scarcity= Scarcity is the limited availability of a goods or service.

2. Limited Means (resources ):   Human wants are unlimited but resources or means to satisfy them are limited. The means (resources) refer to goods and services which we use to satisfy our wants. They are material and non- material goods like time, money, services, resources etc. These resources are scarce.

Here the term scarcity is used not in the absolute sense but in the relative sense i.e., in relation to demand. A commodity may be available in small quantity but if nobody demands, it then it is not scarce. Hence, the scarce means are the basis of all economic problems. Because, if all these means or resources are not scarce, then there will be no problem in economics.

3. Alternative Use of Resource:   All the scarce means(resources) can be used in more than one purpose. In other words, they can be used in several purposes. For instance, land is very scarce, but land can be used for construction of buildings, cultivation, playground etc. Likewise, all these economic resources are used for various purposes. Thus, in reality goods can be put to alternative uses of varying importance.

The problem of economising resources leads to the problem of choice. Since wants are numerous and means are scarce, we have to choose the most urgent wants from these unlimited wants. Hence, the consumer will select few wants from the numerous wants according to his preference pattern. Thus, scarcity of resources makes the choice necessary. Hence, Economics is termed as a science of choice.

Scarcity definition is more scientific than both wealth and welfare definitions, but still it has following criticisms:

1.Static(stable) definition:  Prof Samuelson pointed correctly that Robbins’ definition is not dynamic in nature, because it has only discussed about the problems of present generation, not anything about future generation. Hence the definition suffers with the problem of economic growth.

2. Too Vast:  It discussed with the scope of economics to all the activities of mankind that are related to the problem of choice. The problem of choice is found in both social and unsocial beings. Thus it has no social significance in real world.

3. Economic Problems also arise from more supply:  Some economists claimed that economic problem also arises from the plenty of goods as well. The Great Depression of 1930s in USA was due to abundance of goods, but not due to scarcity of resources.

4. Not fit for socialistic economy:   Prof. Maurice has criticized Robbins’ definition that his definition is not applicable for a socialistic economy, because in this type of economy, the Government takes all the initiatives for supplying all the basic necessities of life among the citizens. For the betterment of whole society the Government usually launches several beneficiary activities.

Growth Oriented definition of Economics by Paul. A. Samuelson- 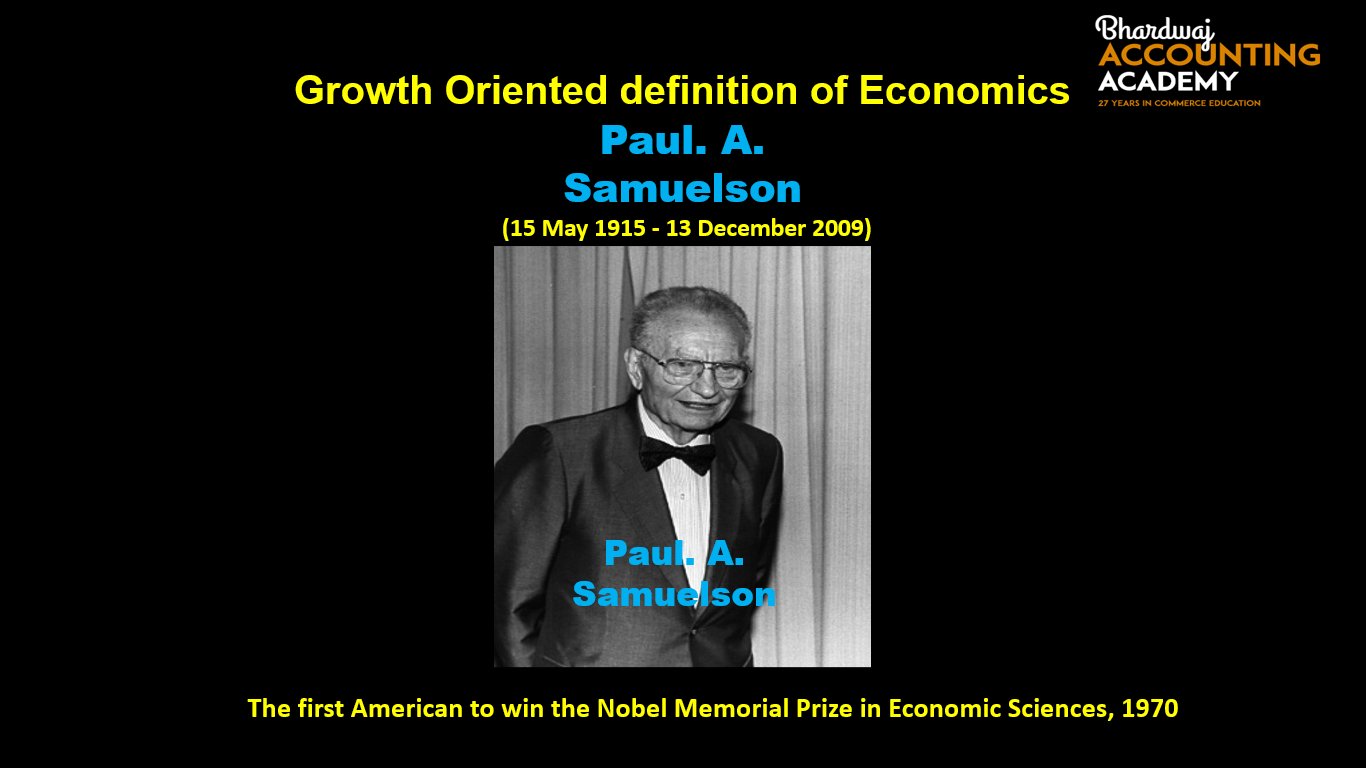 “Economics is the study of how man and society choose with or without the use of money, to employ the scarce productive resources, which have alternative uses, to produce various commodities over time and distributing them for consumption, now or in the future among various person or groups in society.”