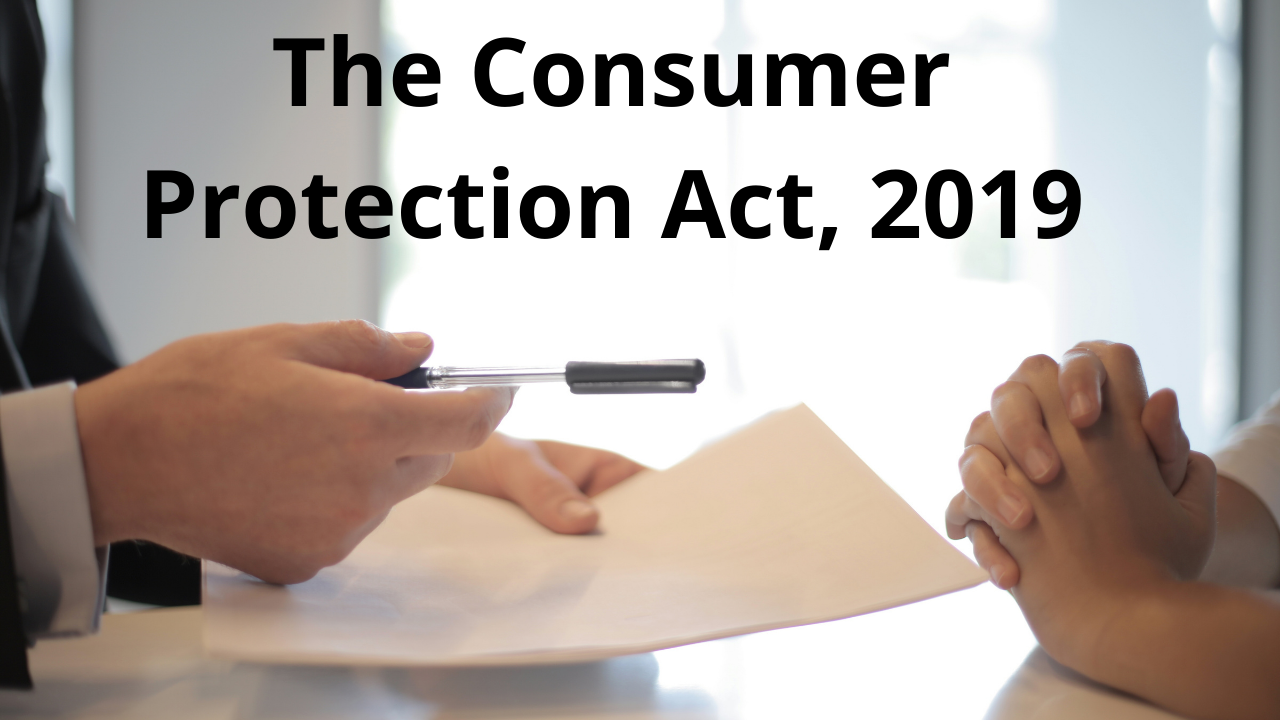 * This bill was introduced in the parliament by the Minister of Consumer Affairs, Food and Public Distribution, Mr. Ram Vilas Paswan on July 8, 2019.

*The bill received assent from President Mahamahim  Ram Nath Kovind on 9 August and was notified in The Gazette of India on the same date.

*Consumer Protection Act, 2019 is a law to protect the interests of consumers.

*The Act includes the establishment of the Central Consumer Protection Authority, CCPA to promote, protect and enforce the rights of consumers.

*Save as otherwise expressly provided by the Central Government, by notification, this Act shall apply to all goods and services.

*This act was inevitable to resolve a large number of pending consumer complaints in consumer courts across the country.

*It has ways and means to solve the consumer grievances speedily.

*The New Act also introduces the concept of product liability and brings within its scope, the product manufacturer, product service provider, and product seller, for any claim for compensation. The Act provides for punishment by a competent court for the manufacture or sale of adulterant/spurious goods.

(1) The central government will set up a Central Consumer Protection Authority (CCPA) to promote, protect, and enforce the rights of consumers.

(2) It will regulate matters related to violation of consumer rights, unfair trade practices, and misleading advertisements.

(3) The CCPA will have an investigation wing, headed by a Director-General, which may conduct inquiry or investigation into such violations.

(4)  The Central Authority shall consist of a Chief Commissioner and such number of other Commissioners as may be prescribed, to be appointed by the Central Government to exercise the powers and discharge the functions under this Act.

(5)The Central Government shall provide the Central Authority  such number of officers and other employees as it considers necessary for the efficient performance of its functions under this Act.

(7) The Central Government may appoint a Director-General and such number of Additional Director-General, Director, Joint Director, Deputy Director, and Assistant Director, from amongst persons who have experience in investigation and possess such qualifications, in such manner, as may be prescribed.

(10) The inquiries or the investigations made by the Director-General shall be submitted to the Central Authority in such form, in such manner and within such time, as may be specified by regulations.

(11) The salaries and allowances payable to, and the other terms and conditions of service of, the officers and other employees of the Central Authority appointed under this Act shall be such as may be prescribed.

(12) The headquarters of the Central Authority shall be at such place in the National Capital Region of Delhi, and it shall have regional and other offices in any other place in India as the Central Government may decide.

(13) The Central Government may, by notification, make rules to provide for the qualifications for appointment, method of recruitment, procedure for appointment, term of office, salaries and allowances, resignation, removal and other terms and conditions of the service of the Chief Commissioner and Commissioners of the Central Authority.

CCPA will carry out the following functions, including:

(i) Inquiring into violations of consumer rights, investigating and launching prosecution at the appropriate forum;

(ii) Passing orders to recall goods or withdraw services that are hazardous, reimbursement of the price paid, and discontinuation of the unfair trade practices, as defined in the Bill;

(iii) Issuing directions to the concerned trader/ manufacturer/ endorser/ advertiser/ publisher to either discontinue a false or misleading advertisement, or modify it;

“consumer” means any person who—

Explanation.—For the purposes of this clause,—

(a) the expression “commercial purpose” does not include use by a person of goods bought and used by him exclusively for the purpose of earning his livelihood, by means of self-employment;

(b) the expressions “buys any goods” and “hires or avails any services” includes offline or online transactions through electronic means or by teleshopping or direct selling or multi-level marketing;

1.  Right to Safety-the right to be protected against the marketing of goods, products or services which are hazardous to life and property;

2.  Right to be informed-the right to be informed about the quality, quantity, potency, purity, standard and price of goods, products or services, as the case may be, so as to protect the consumer against unfair trade practices;

4. Right  to be heard-the right to be heard and to be assured that consumer’s interests will receive due consideration at appropriate fora;

Check Out : our live online classes