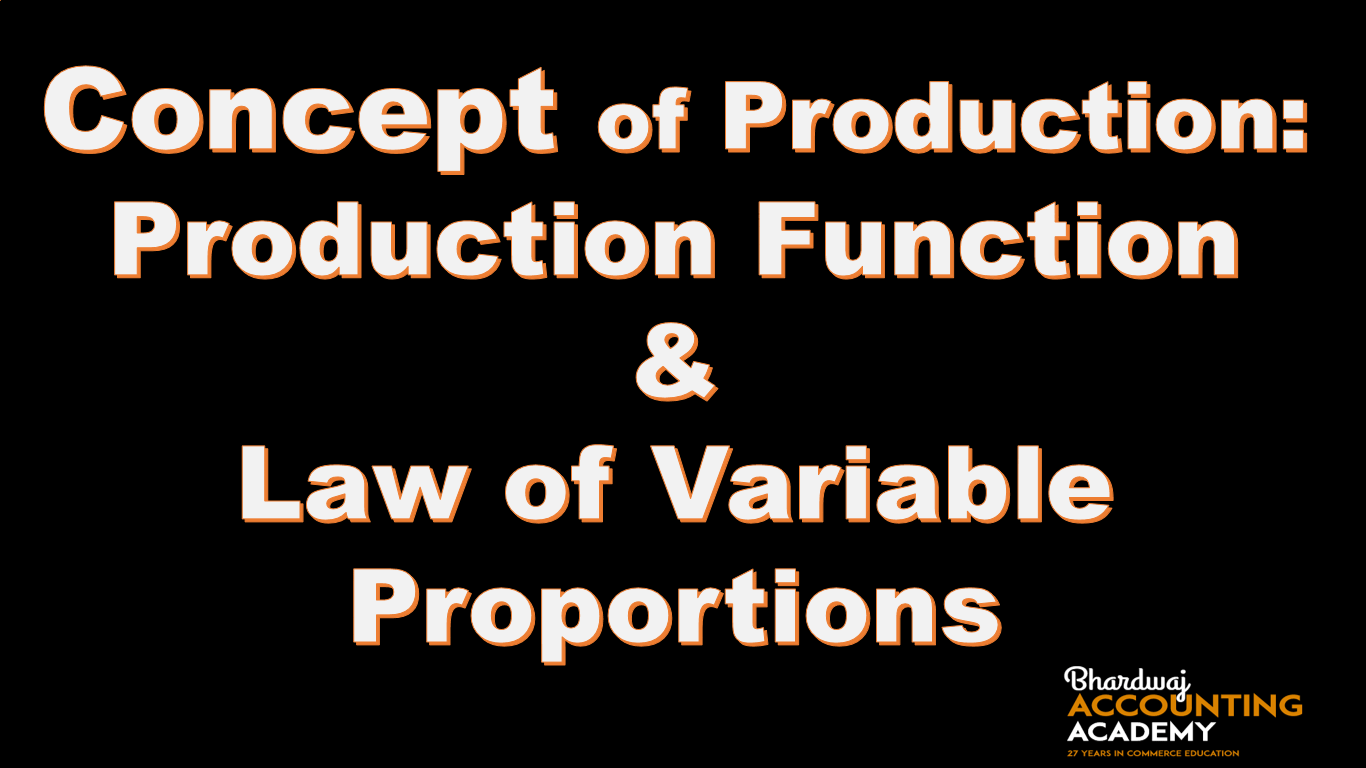 Concept of Production: Production Function and Law of Variable Proportions

The act of making goods and services is called production. It is also defined as the process of transformation of physical inputs into physical output.

In other words- Production means the creation of utility.

According to A.H. smith “ Production is the process that creates utility  in goods and services”

It also refers to the creation of goods (or performance of services) for the purpose of selling them in the market.

Productive resources are known as factors of production.

There are four main factors of production: land, labour, capital, and entrepreneur.

production function refers to the physical/ functional/ mathematical relationship between physical inputs and physical output under given technology at a given period of time.

Preparation of Journal, Ledger, Trial balance and Financial Statements of a partnership firm on the basis of a case study- 15 Transactions

Variable/Prime/Primary inputs are those which can be changed in the short run to
change the level of output viz. daily labour, raw materials, fuel, transportation etc.

Fixed/Secondary/supplementary/Overhead inputs are those whose use can’t be changed in
the short run in order to change the level of output, viz. land, fixed capital, organization.

Product refers to the volume of goods produced by a firm or an industry during a particular period of time. There are three measures of Product or Production:

(a) Total product(TP) or Total physical product denoted by TPP:

For example, 2 units of labour combined with 1 unit of capital can produce 10 Chairs per day.

Here 10 Chairs is the total physical product which is produced with the given level of inputs (labour(Variable)  and capital(Fixed).

Average Product (AP) is defined as the output per unit of variable input.

In the other words – APP is the output produced per unit of input employed.

It is obtained by dividing Total Product by the quantity of variable factor.

Marginal Product (Mp) is defined as change in total product when an additional unit of Variable factor get employed, keeping other factors fixed.

In the other words – MPP of an input is the additional output that can be produced by employing one more unit of that input while keeping other inputs constant.

RELATIONSHIP BETWEEN TPP AND MPP:

The relationship between TPP and MPP can be explained as given below:

ii)When MPP falls but remains positive, TPP increases but at a diminishing rate.

RELATIONSHIP BETWEEN APP AND MPP:

(i)As long as MPP is greater than APP, APP increases.

(ii)When MPP is equal to APP, APP is maximum and constant.

(iv)MPP can be zero and negative but APP is never zero or negative.

Relationship among TPP, APP and MPP (through diagram): 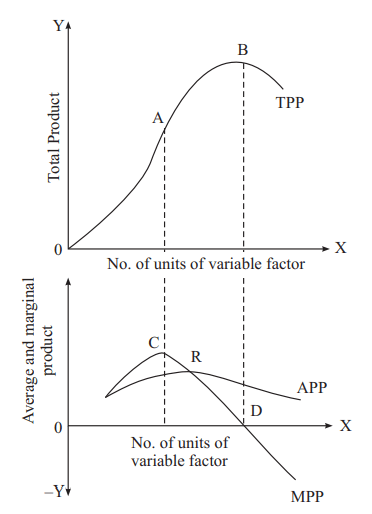 SUPPLY AND ITS DETERMINANTS/FACTORS AFFECTING SUPPLY

Law of Variable Proportions (LVP) states that as we increase quantity of only one input keeping other inputs fixed, total product (TP) initially increases at an increasing rate, then at a decreasing rate and finally at a negative rate.

According to the Law of Variable Proportions, the changes in TP and MP can be classified into the following three Phases:

Assumption Of The Law OF VARIABLE PROPORTIONS:

The law operates under the following assumptions:

(i) It operates in the short run.

(ii) There is no change in the technology of production.

(iv)All the units of variable factors are equally efficient.

(v)Full substitutability of factors of production is not possible.

(vi) In a production process when only one factor is varied and all other factors remain constant.

(vii) This law applies to the field of production only.

There are three phases of returns to a variable factor:

Negative Returns to a factor In this phase, MP declines and it becomes negative. Here the TP also starts falling. It operates from the level of output where the MPP of labour is zero but subsequently becomes negative.

INCREASING RETURN TO A FACTOR

DIMINISHING RETURNS TO A FACTOR

NEGATIVE RETURN TO A FACTOR

4. Decrease in the efficiency of the variable factor.