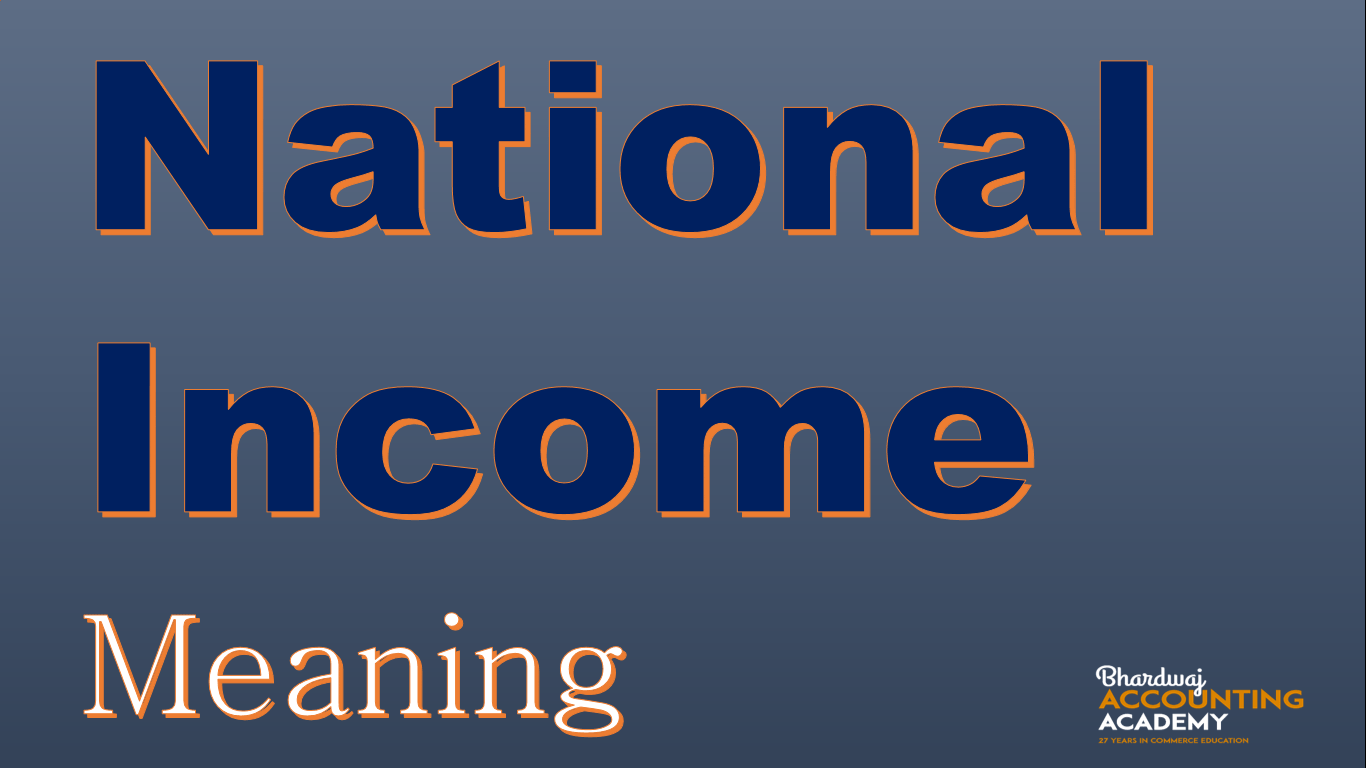 National Income refers to the money value of all final goods and services produced by normal residents of a country during an accounting year, Out of this depreciation and net-indirect taxes are deducted and Net factor income from abroad (NFIA) is added.

National Income refers to the sum total of all the factor incomes, earned by normal residents of a country during a period of one year.

Normal residents- Normal residents refer to an individual or an institution who ordinarily resides in the country for more than one year, and whose Centre of economic interest also lies in that country.

Centre of Economic Interest’ implies two things:
1. The resident lives or is located within the Domestic Territory; and
2. The resident carries out basic economic activities of earnings, spending and accumulation from that location.

Following are not included under the category of Normal residents:-

Final goods and services- Final goods are those goods that are ultimately consumed rather than used in the production of other goods.

Final goods refer to those goods which are used either for consumption or for investment purposes.

These goods satisfy the wants of ultimate producers or consumers or both.

Buying of furniture by a household consumer for his house is final good for him whereas the same when bought by a producer for his office, is producer’s final goods.

Money Value of Final goods is included in both National and Domestic Income.

All those goods which are used by the producers for producing other goods are known as Intermediate goods.

Depreciation– Loss in the value of fixed assets due to normal wear and tear; passes of time and expected obsolescence in technology, known as depreciation.

Depreciation is Also known as  Consumption of Fixed Capital or Current Replacement Cost.

Indirect taxes- Indirect tax is defined as the tax imposed by the government on a taxpayer for goods and services rendered. Indirect tax is a type of tax where the incidence and impact of taxation do not fall on the same entity.

In the case of indirect tax, the burden of tax can be shifted by the taxpayer to someone else.

Subsidies- Subsidies are the ‘economic assistance’ given by the government to the firms and households, with a motive of general welfare. If we deduct these subsidies from indirect taxes, we get net indirect taxes.

Thus, we can say that National income is defined as the money value of all final goods and services produced by normal residents of a country, in an accounting year, whether operating within the domestic territory of the country or outside.

*National Income is a Flow concept.

*National Income is always expressed in terms of money.

*National Income is measured for a particular period of time, one accounting year.

*National Income stands for the income of a particular country.

*The National income is a study of the Macroeconomics concept.

*National income presents the picture of the overall performance of the economy as a whole in the course of time one financial year.

*While calculating national income, the transfer income in the form of old-age pension, unemployment allowances, scholarships, etc., is not included.
*National Income includes all the factor incomes.