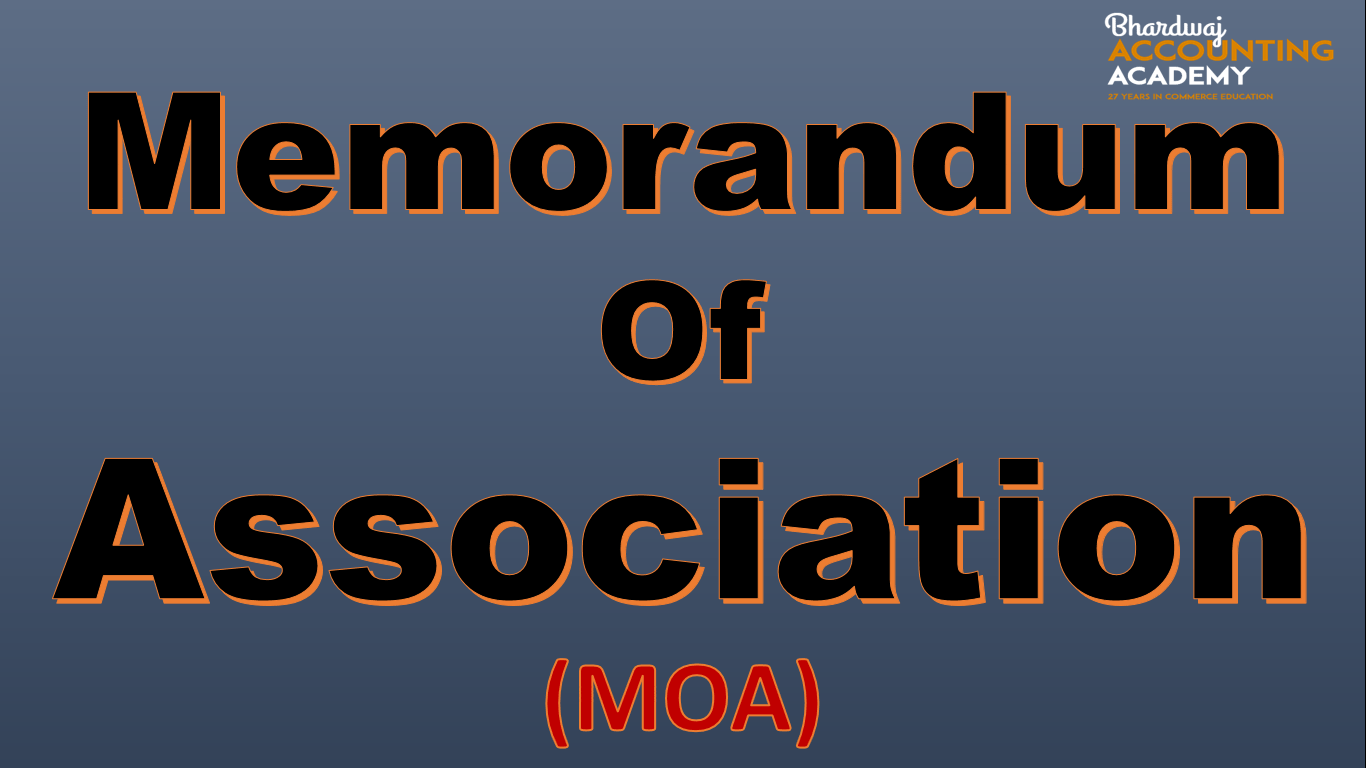 Memorandum of Association or MOA

What is Memorandum of Association or MOA?

According to Section 2 (56) of the Companies Act, 2013 “Memorandum” means the memorandum of association of a company as originally framed or as altered from time to time in pursuance of any previous company law or of this Act.

Contents of Memorandum of Association

The Memorandum of Association contains the following clauses:

However, the Central Government may permit a company to dispense with the word Limited, if the company is formed for the promotion of commerce, art, religion, science, charity and so on and the company utilises its income in promoting its objects and prohibit payment of dividends to its members. However, Section 12 of the Companies Act, 2013 creates personal liability in the case of mis-description of name.

The object clause is the most important one in the memorandum. The objects are divided into two sub-clauses.

(a) Main objects and

These are the objects to be pursued by the company on its incorporation. It includes the objects incidental or ancillary to the main objects.

Any other objects means objects which are not included in the first sub-clause.

The authorized capital of the company shall be mentioned in this clause. The division shall give the total number of shares and the nominal value of each share.

(i) substantive limits and

Substantive Limits: Section 13 of the 2013 Act allows an alteration of objects only in the following cases:

(1) an alteration of objects is allowed to enable the company to carry on its business more economically or more efficiently;

(2) an alteration in the objects can be made with a view to attain the main purpose of the company by new or improved means;

Example: with a view to taking advantage of new scientific methods or discoveries.

(3) to enlarge or change the local area of the company’s operation;

(4) to carry on some business which under existing circumstances may conveniently or advantageously be combined to the business of company;

(5) to restrict or abandon any of the objects specified in the memorandum;

(6) to sell or dispose of the whole or any part of the undertaking of the company;

(7) to amalgamate the company any other company or body of persons.

Section 13(2) of the 2013 Act provides as follows: Any change in the name of a company shall be subject to the provisions of sub-sections (2) and (3) of section 4 and shall not have effect except with the approval of the Central Government in writing.

When objects of a company are altered, the specified procedure should strictly be observed. The alteration must be passed in the general body meeting of the company with a special resolution. It should be confirmed by the Company Law Board (now Tribunal). The Company Law Board must be satisfied that prior intimation has been served o all debenture holders and interested persons. A creditor has right to come forward with his objections for the alteration of the objects. In such a case, his consent must be procured or his claim must be satisfied.

Any alteration comes into force when it is registered. If an application for registration is not made with the registrar within three months from the order of the board, the whole proceedings of alteration will lapse. However, the board has the power to extend time for registering an alteration, if there is sufficient reason to excuse the delay in making the application for registration. A certified copy of the order of the board and a printed copy of the altered memorandum must be filed with the registrar.